In 2014 I committed my wife and myself to a “summer project”: restoring a 1964 Fireball Meteor travel trailer.  How hard could it be, I asked myself.  It was only 13’ long; the videos I watched fucused mainly on woodworking skills; anmd I found what looked to be a likely candidate on eBay.  The seller, Todd Anderson of Salt Lake City, Utah sold a book and CD about how to restolre one in a couple of weeks.  He adsvertised it as well maintained, ready to go camping, and only in need of minor preparations for trips in a vintage camper.   Yes, PT Barnum was right: there is a fool born every minute.  My minute was in November 1946 folloiwed by another fool’s minute in July 2014.

This fool bought a 1964 Fireball Meteor built by the Kurmann Trailer Company in San Fernando, CA (laterr renamed the Fireball Trailer Company as a sales gimmick tied to the US space race).  That little, white camper with red accent arrows “sang to me”.  It was a 1964: the year I enlisted in the Air Force.   And I was stationed in California in 1965-1966.  Karma.  A marriage made in heaven!

Ahhhh, not so much, I found.

after “winning” it on an eBay test of wills, I hired a trucker to pick it up and haul it to my house.  Two of our viksiting grandkids followed its odyssey over the next three days.  They, along with my wife and me, were waiting impatiently as it trundled down our driveway.  It was beauty incarnate aas the driver levelled it and disconnected it!  My wife, ever the optimist, asked me if I thought there would be enough work to keep me busy.

I bent over, stuck my hand under the belly, grasped a handful of bedlly material, squeezed it into soggy dust, and said, “we’re screwed”.  Stephanie, still that eternal optimist, after listening to me point out obvious issues, sweetly said nothing was too hard for us.  Then she said all was OK unless it lasted more than six months.  So began the summer project now in its fourth year.

After hearing me harrangue about the Fireball being a derelict, she orderd me to stop calling it a derelict.  She said “let’s just name it Derel” for short.  So we did.

After emptying out Derel, we moved him down to our secondary driveway to be near our John Deere Room which is my woodshop. And there Derel sat from 2014-2018 and hopefully for a long, long, time.

Dere’s story began with controlled demolition; followed by more demolition; followed by more finely focused demolition leading to his current state.  Today, Derel looks like an old camoper, but that is misleading.  Never one to go half-way, Derel has almost 100% new wood; 12/2 romex wiring harness; a modern, Dometic Pelican low profile aior conditioner; a Performance Dynamics 9245C Converter; a battery; spare tire carrier; 100% new roof capable of carrying a persdon’s weight; a propane cooktop with microwave rather than the original stove; new, custom cushions/mattresses; a color-coordinated palette Stephanie chose; and a new paint job almost finished this week.   (Note: the body work and paint job came about because in 2017, after all that work, time, and expense, a monster hail storm turned Derel into a “golf ball” camper.  But that’s another story.).

In my defense, part of the reason Derel is into his fourth year is that we leave home every Jan-May of June to escape the winter chill.  Stephanie hates the cold (I hate heat); she put up with being an Army wife (I switched from Air Force enlisted to Army officer); and suffered through too many German winters.  She had the first 30 years supporting my military career, so she gets the next 30 years.  But all that is background noise.  Here is Derel: 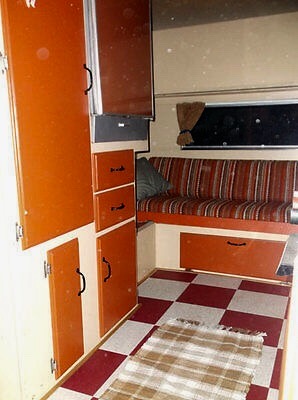 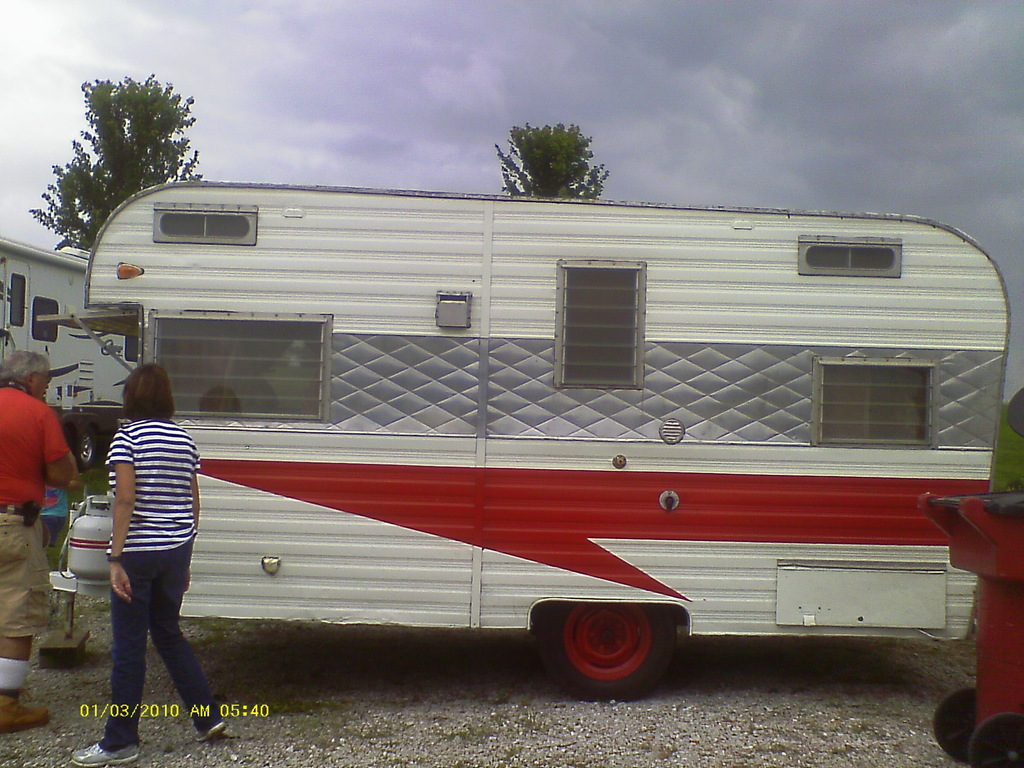 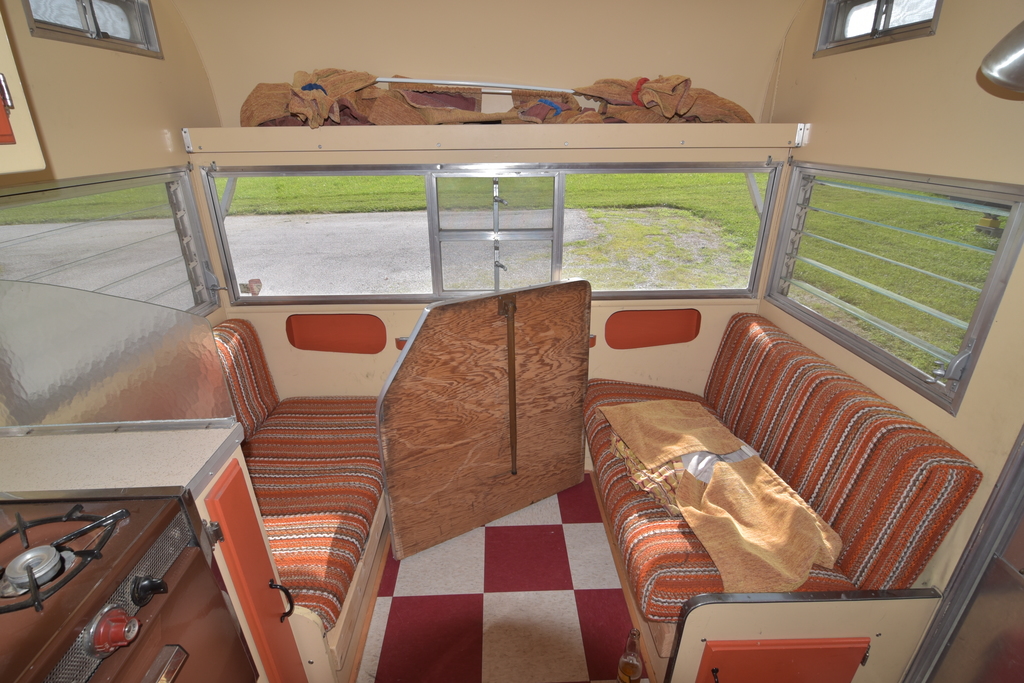 This Fireball looks great! I have a 1963 Fireball 16' Meteor with the upper berth. I've been trying to find the VIN number on it but cant find it anywhere! Could you clue me in? Thanks! - Andy 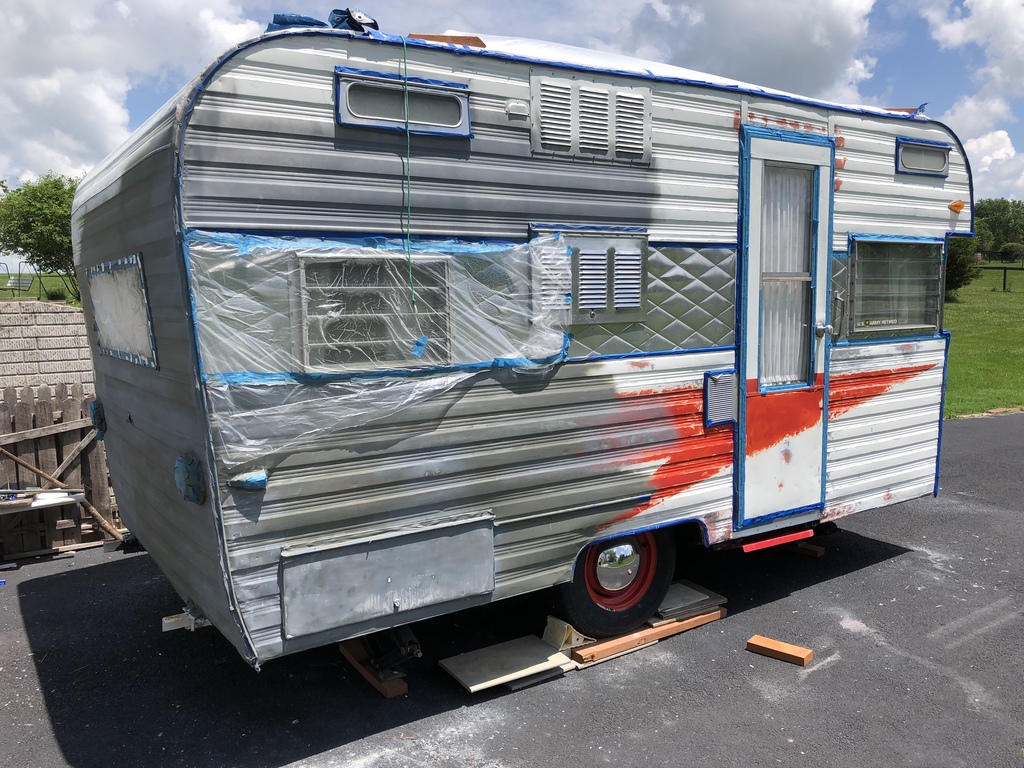 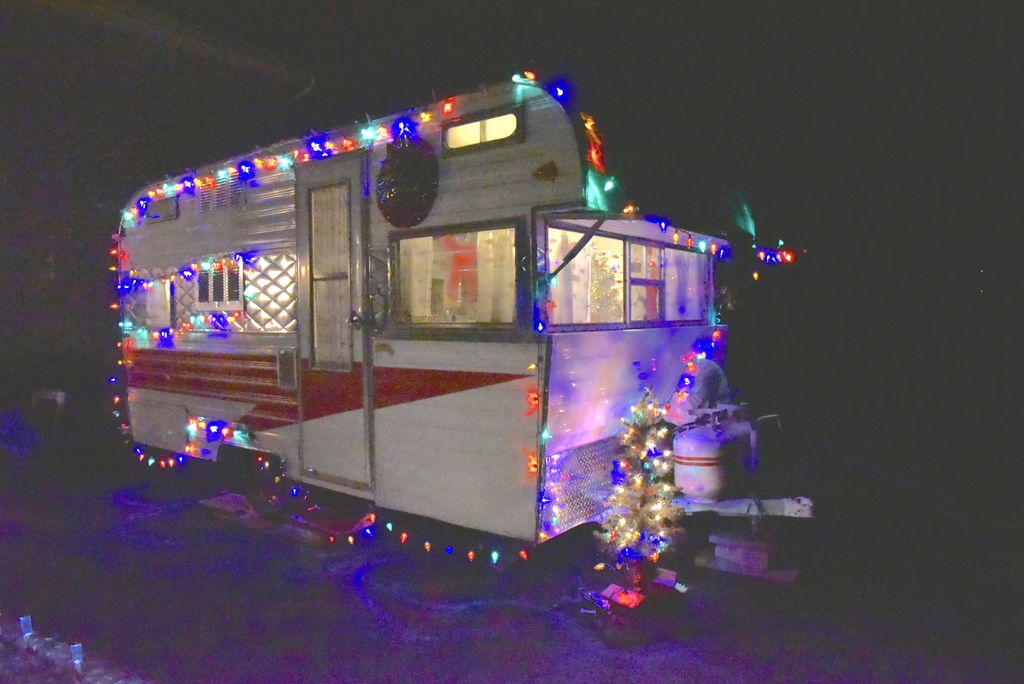 Stephanie peeling masking off red accent arrows.  She laid out the accents, so they are A-OK! 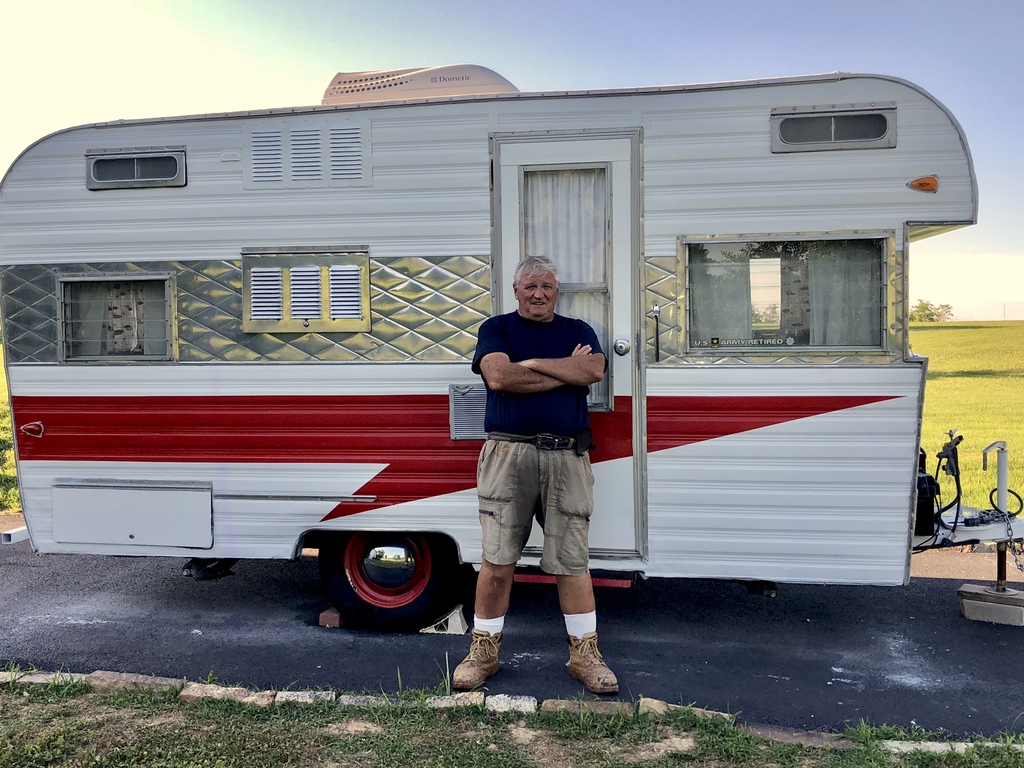 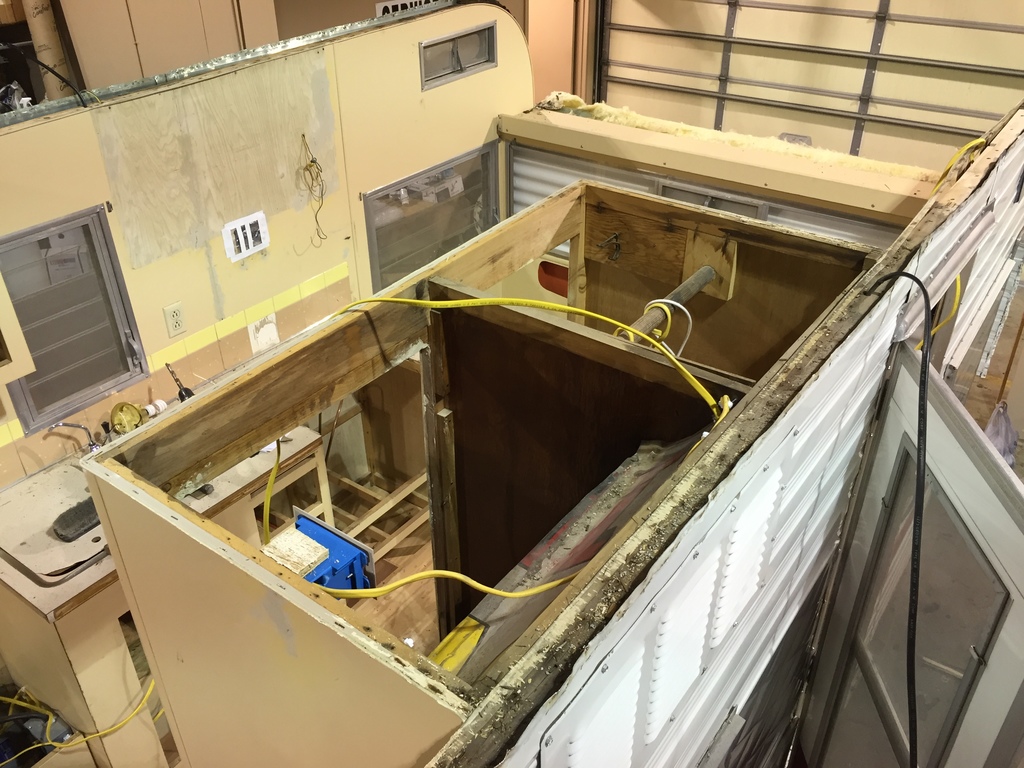 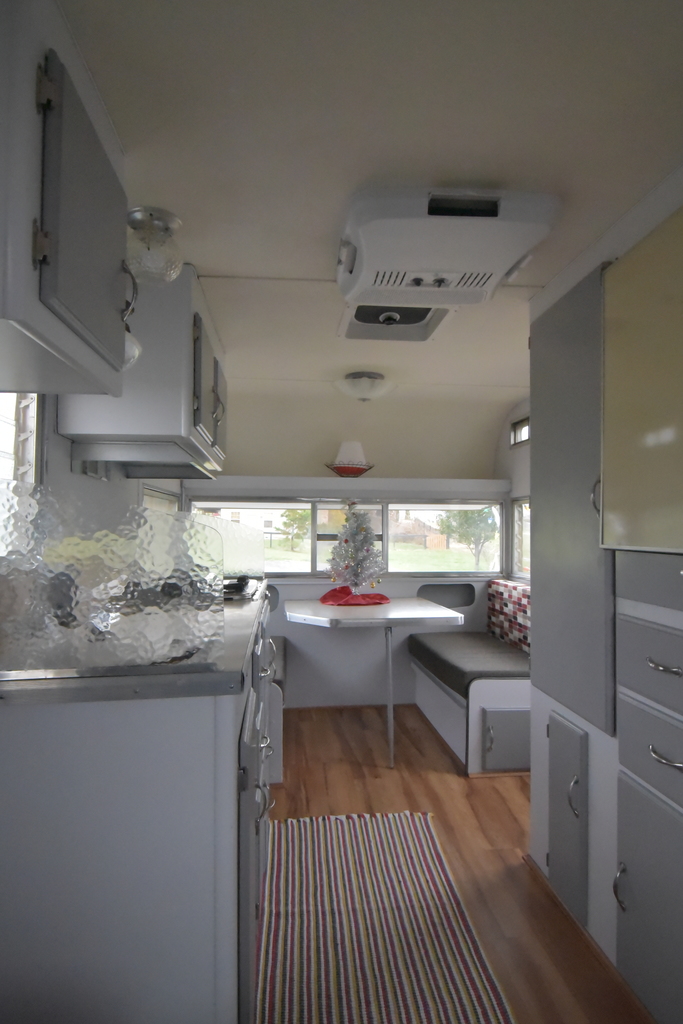 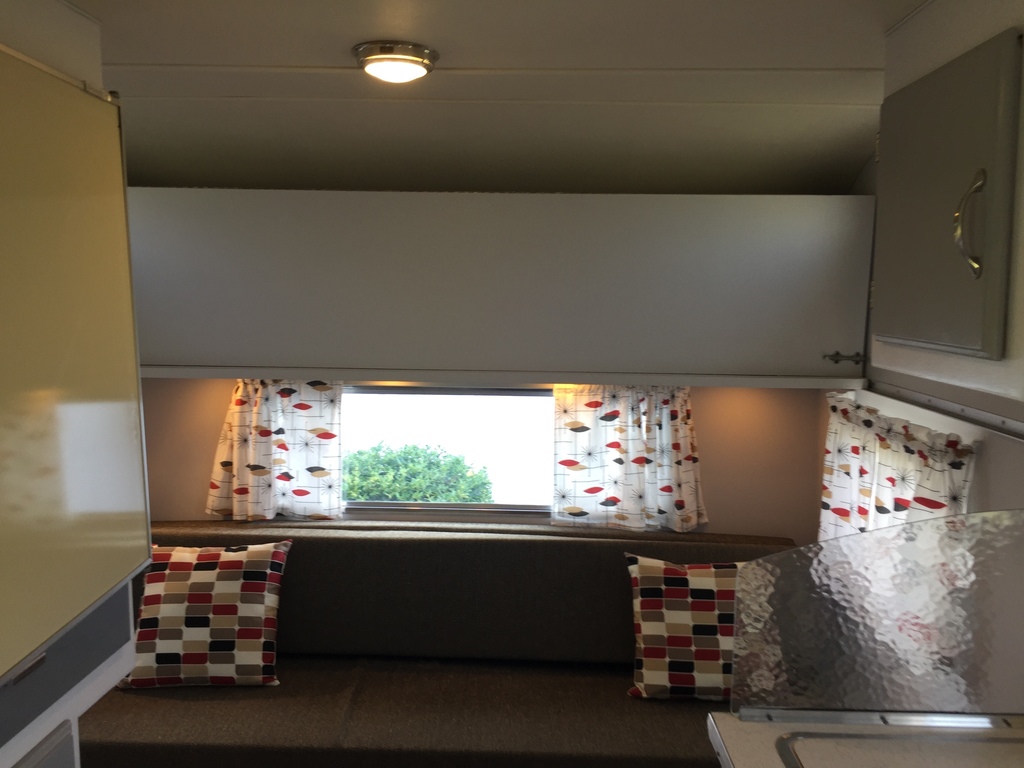 Ikea 12 volt
‘puck” lights and 12v reading light.  Can use all, eitgher, or none.   Loft bunk folded up.  Bed actually quite comfy but I hit my head sitting down if not careful.  Can’t wait to take Derel out.   Our “real camper” is a 2018 keystone Montana Hight Country 3120re 5th wheel.  Wish I could pack Derel in the belly storage area. 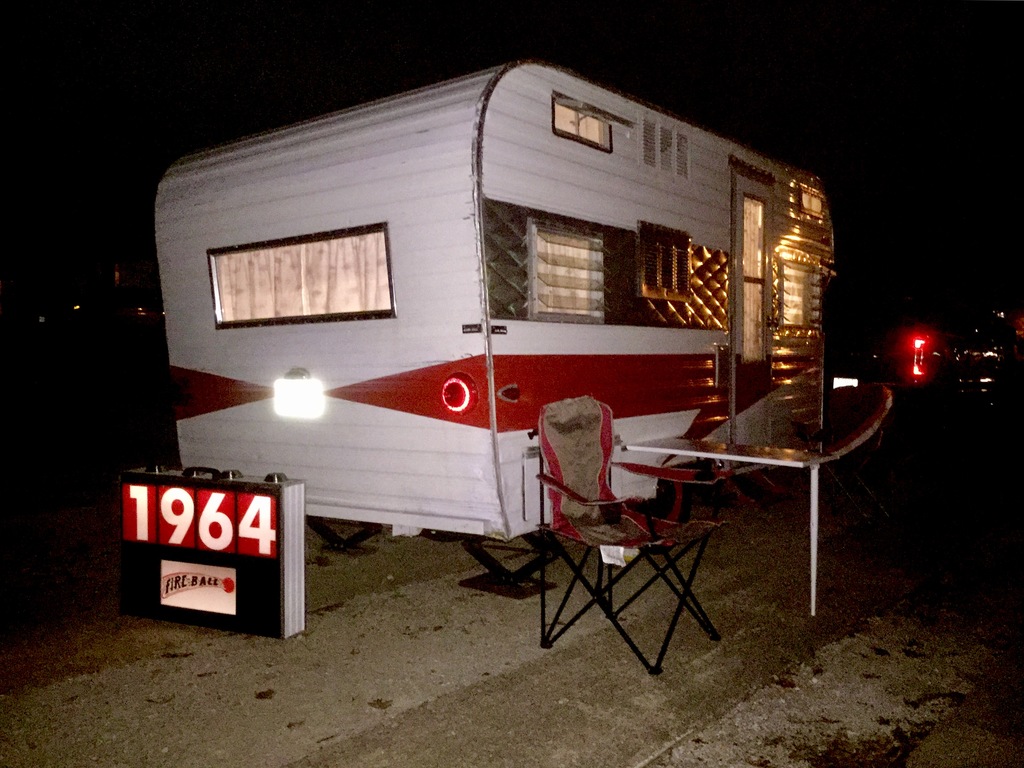 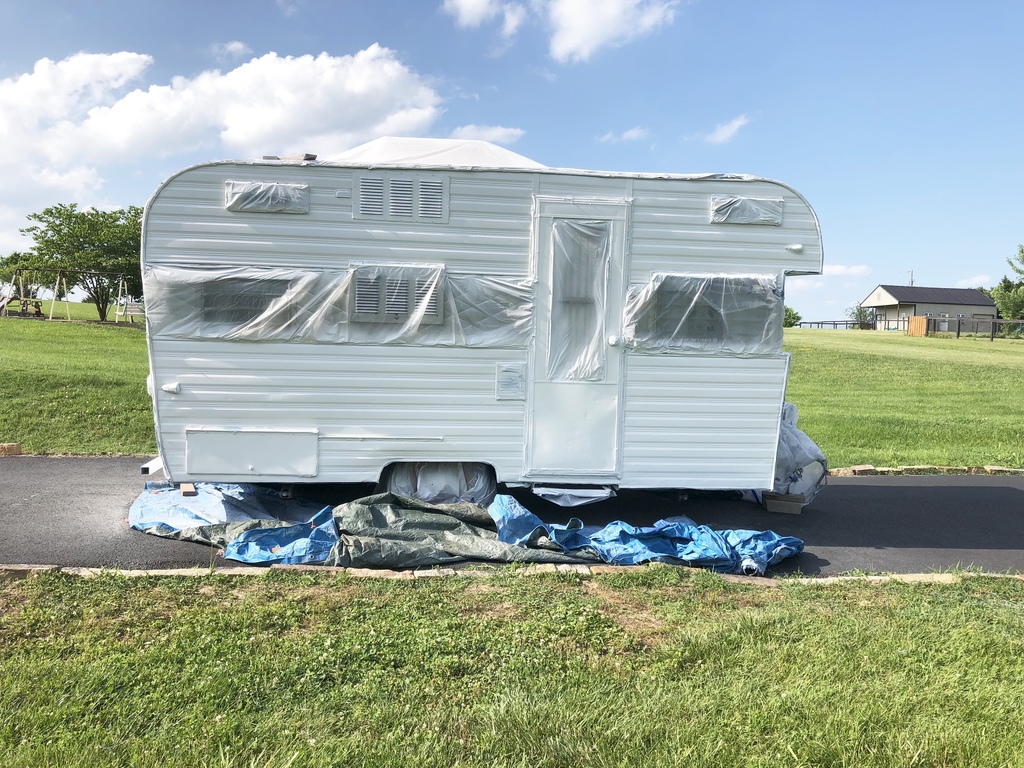