I tried to convince Malinda and Jeff to take my car only as its usually bedlam getting into and out of Colby. But they insisted they drive so we took 3 cars. Jeff found his own way and got a nice spot to see the fireworks. Malinda followed me to the Baptist church near the park where I always park. I was very surprised we found 2 spots left open to park.

Whats a bigger blessing than that? They had police tape strung up to keep people back a safe distance from the fireworks. All the good spots were filled, the park was mobbed. We kept walking and I wish I would of taken a photo to show you. There in the front row, right in front of where they blow off fireworks was a spot open with no one sitting there. We threw down our sheet, Malinda set up her chair and we had thee BEST view. We were blessed.

We were so close we felt the fireworks in our chest. Amazing.

Pulling out it was madness. So we kicked back until it thinned enough to ease out. While waiting someone blew their horn and a bunch of cars joined in including me and Malinda. It sounded like a rendition of Dueling Banjos car horn style. What fun!

As we were exiting a couple of policeman zoomed out we thought it was for traffic control it wasn't.

We approached my street and there was the strangest site. I saw a car parked crooked and facing the wrong way in the middle of my street. I said jokingly to Dov hey that's your car. He yelled IT IS! I zipped into my driveway and we rushed out. All of us were so confused. Firetrucks, police cars, everyone out and there's Dovs car. We found out a drunk driver smashed into his car, ran across 4 lawns before wiping out a porch.

How did this man perform this feat is beyond us. How fast was he going and how did he spin Dovs car around?

A mystery for sure.

First 2 are of me n Ruth enjoying the fireworks. Heres the link to the news story. 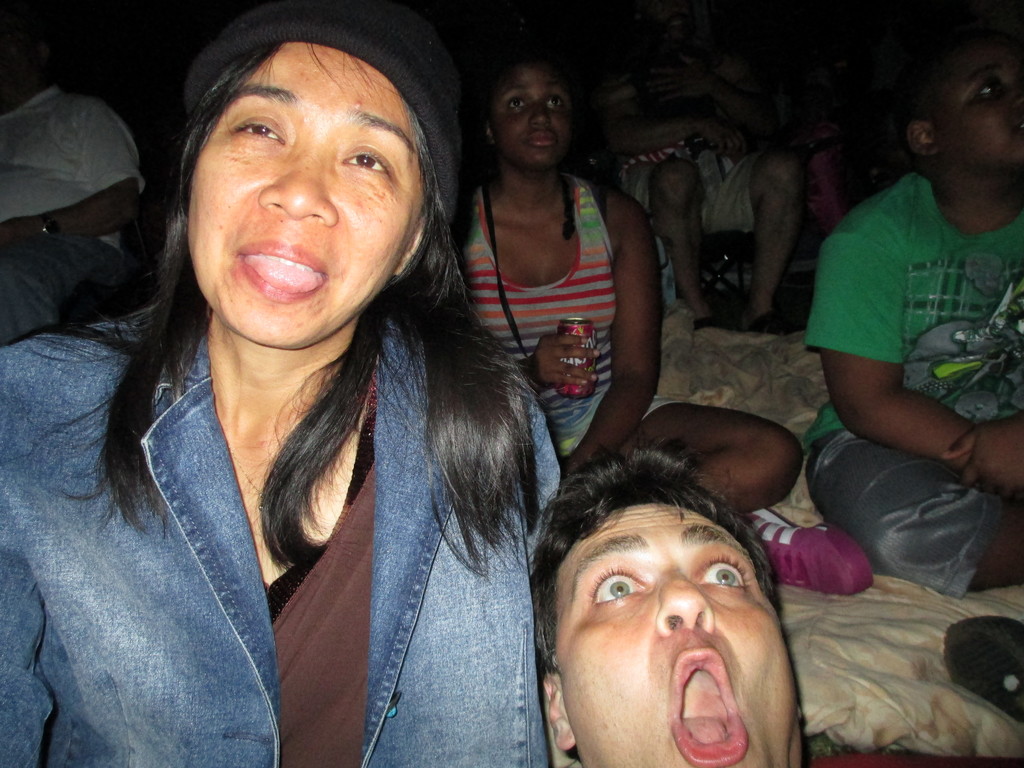 Well Pat...  I learned a valuable lesson before disaster struck, I won't be leaving the GoGo Bus parked out there as I use to in the past.

The drunk driver walked away with no injuries, my friends car is totaled, 3 lawns need to be redone, and one house needs work but no one hurt which is a miracle considering it was the 4th and everyone was out and about walking or driving.

The same day this story about the 74 year drunk driver appeared in the paper another one below it caught my attention.  An 88 year old man led police on a chase.  One patrolman said it was more like a parade, speeds went as low as 2 mph.

Started by Todd Gill in Vintage Camper Parts For Sale 15 hours ago.