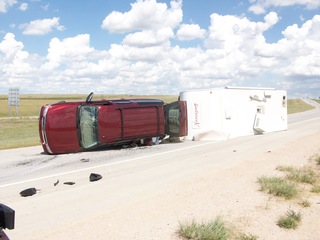 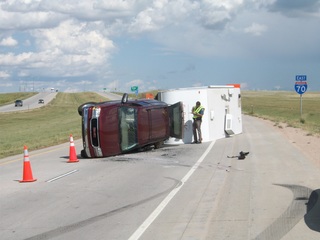 Lately I've been thinking about what caused our wreck in Colorado. Could it be that the GMC Yukon's ABS breaking system overrode the brake controller so that the trailer brakes did not engage? Is this possible?

We really want to get on the road again but can't seem to get over our near death experience. Maybe we could if we can learn what caused the wreck.

Comment by Pat Daly on October 9, 2011 at 12:16pm
thanks for the good words and input Ragzdaddy. Much appreciated. No wind, properly balanced butttt the ashpalt transitioned to concrete with a 4 inch lip (temporary they said while the interstate was being worked on) and I could see where the trailer went up and then landed a little cocked wises and then the dreaded sway started... end of the line for us. 8 other towed vehicles had wrecked in exactly the same place, said the tow truck driver, in the last 4 months of construction; State patrol didn't even want to talk about that!... walked away when asked. Job security i guess.  Having a hard time finding a really unique class A and don't have the big bucks for you diesel dually cummins powered 5th wheels. So, the hunt continues...

We'll really never know. We do know that next time we would definately have a "hensley" type anti-sway controller as part of the trailer hitch system. We did have a new and excellent (well, except it did wreck) weight distributing hitch. So good, in fact it never came unhitched after 3 360 degree rolls at 65 mph. Wow!

- Grooved cement pavement. the interstate up in the high lonelies above 6,000 feet in Colorado transitions from asphalt to cement with heavy grooves... and there is about a 3 inch "lip" where it transitions. We actually felt the trailer go up in the air when it went over the lip so it is possible that the trailer tires landed at a slight angle to the straight grooves and lost control.

- SUV abs system. We did feel the abs system "pumping" as we carefully tried to apply brakes and slow down so it was active, but we did not see corresponding trailer braking skid marks so the abs may have overridden the brake controller. GMC nor the brake controller company would respond to any inquiries. Totally stonewalled.

- There have been 8 other "towed" vehicles wrecked within 1 mile of where we wrecked in less than one year. Hmmm....   the very wonderful Colorado state partollman got way quiet about this and actually got in his car and left. Hmmmm on that one too.

Our beloved GMC Yukon XL probably saved our life, along with the Michelin tires. You can't even tell it totally rolled over and then skidded on it's side for what seems like hundreds of feet being whipped down the interstate by the 5,000 pound trailer. The side of the suv looked like someone had taken a huge rake to it and ripped all the sheet metal... which was the only thing between our heads and the grooved concrete.

- This was a new "test" trailer that we were testing for a trailer manufacturer. We had towed it from Oklahoma to florida twice, once to South Dakota, including thru blizzards with 40 mph winds, ice and snow and to Colorado where it met it's demise. It towed like it was on rails, never even any sway. Go figure.

- Weather was perfect, no wind and bluebird skies.

- Instantly uncontrollable with the trailer beside than in front of the suv towing us backward at 65 mph (speed limit 75... but of course we'd never tow THAT fast)

Made us wish we never sold our 57 flxible bus convrsion. THAT never wrecked. LOL

Comment by jody kaplan on November 28, 2010 at 2:06pm
Hi Pat , glad your family survived it , maybe check for recalls with both . Your DMV might or traffic safety ( as in Highway units , investigators )might have some direction to point u . Just a thought . Good Luck with checking it out . Jody K