My only real access to get something under in any way was through the storage area in the back side of the camper.  That was crowded up with two large batteries and some home made wooden trays to hold them (gotta wonder on that....) on top of two layers of carpeting and lots of wires...and some wallpaper that extended down from the bathroom hiding the back that was in really sad shape. I removed everything...and that's when things fell apart. Considering how good the walls in the bathroom looked, solid....fresh plywood...I did not expect this.  Literally, things fell into heaps of compost and rotted pieces of wood. Wet, nasty stuff.  The more I ripped stuff the more rot I found.  There was a piece of particle board shoved behind the bathroom enclosure, that was hiding the rotted frame pieces.  I yanked those out and they fell apart in my hands.  The floor in that area was the same, wet composted wood. That explains the frames that were made up to hold those batteries.  The floor was too squishy on it's own.

Here's the first pile I took out: 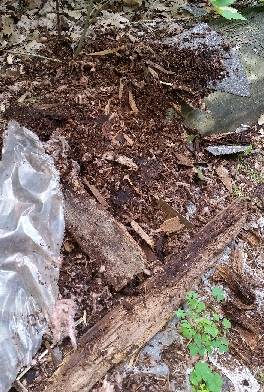 So, I just had to crawl under the closet area and look at the other end of the back...and yepper....same thing: 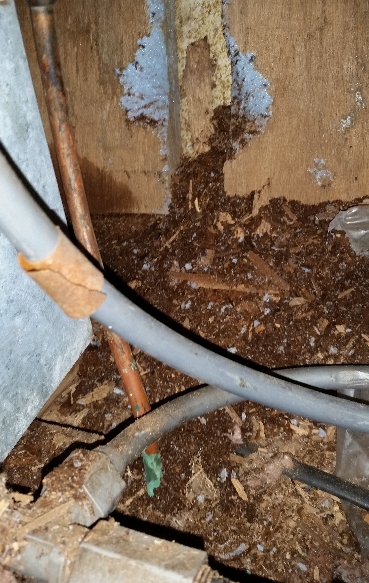 I cleaned out as much as I could on the storage compartment end, there seemed to have been very little lumber in there, 2x2's was pretty much it. The rest of the very back wall had the 2" foam, and those were heavy and soaked to the hilt.  I have a fan blowing in there now to dry up what is left and I will check things over when it's dry. 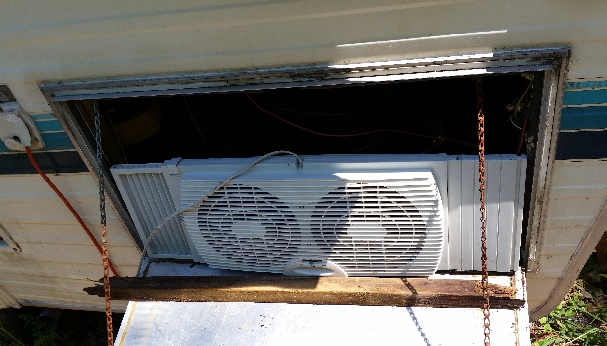 At this point I'm in the boat that Russ was in with his MMP.  I really don't know if this is something I want to continue with.  One positive is that whomever did the partial rebuild in the back/bathroom did do a nice job, but stopped short about 3 feet. Below that is all the bad stuff.   So, it isn't the whole back end that's a problem, it is the lower end.  Good and solid blonde wood where the window and all that is.

I am going to think this over, and after things have dried out, I'll make a decision here.

Comments, suggestions welcome..but here's what I won't do. I won't be pulling the back open by removing the siding/window/etc.  That's where I will stop any future restoration.  That's way too much work for just myself and this thing is too old to be worth it to take that on by myself.

Hope everyone else is having a better day.  LOL

Oh Tina, that is sooooo discouraging to find that. I hope this will look better tomorrow. I know when I kept finding rotten wood, mold, and compost I was ready to throw in the towel. But getting away from it for a while--days in my case--things did not look so bad when I took at it again.

Started by Jennifer Campbell in Shasta Owners on Wednesday.