Hi Folks, Thought I'd start a wee blog, not done anything like this before so here goes nothing. I'd been toying with the idea of buying a Motorhome for a year or so and after two family holiday wa…

Thought I'd start a wee blog, not done anything like this before so here goes nothing.

I'd been toying with the idea of buying a Motorhome for a year or so and after two family holiday washouts in the tent enough was enough.

Being a life long fan of classic american vehicles, V8 motors and drag racing when it came to what to buy there was only one country of manufacture. Over a six month period we looked at a few, some were fairly local, some not so but none were suitable for one reason or another, mainly rust and lots of it.;

I happened across this 94 Southwind 12 miles down the road so went for a look see. It was currently off the road and had been sat for 7 years so mechanically I knew I had a few challenges ahead but the interior sold us on it. It's pretty much like new.....pretty much, well for a 22 year old coach at least. I was by far the nicest and best layout we'd seen, twin beds are a bonus and perfect for us as we take the Grand kids away when we go.

Sooo, we got it at what was a reasonable price, pay to get it recovered home and in for an M.O.T or annual inspection as you guys (i think) would call it. It failed on 13 items. one of which I knew about, a leaky exhaust manifold, insufficient brakes, stabiliser bushes, a arm bushes and 8 wiring or bulb faults. One mystery though was zero nox on the emissions side Mmmmmm ?  I should mention she was running rough at this point....when I say rough I mean real rough !!

We got the work done for the test easy enough over the next few weeks, she passed with flying colours but still the mystery remained on the emissions and time to tackle the engine.  Some parts for the Chevy 454 are easy to come by over here, some not so and with that in mind I bought a whole bunch of sensors, ignition parts and belts/hoses etc and changed a whole bunch out for not much improvement. Codes getting thrown left right and center, black smoke, misfires you name it and only two gears !

Time to call for help and I hope he won't mind me mentioning him but enter stage left our very own Rick Faunce to the rescue. With his help and guidance we've got a sweet running engine, all gears and the first albeit short trip away under our belts. We've got one more issue with the engine, a high idle to sort out but after what was a challenging Winter we're fingers crossed looking forward to a more relaxing Summer. 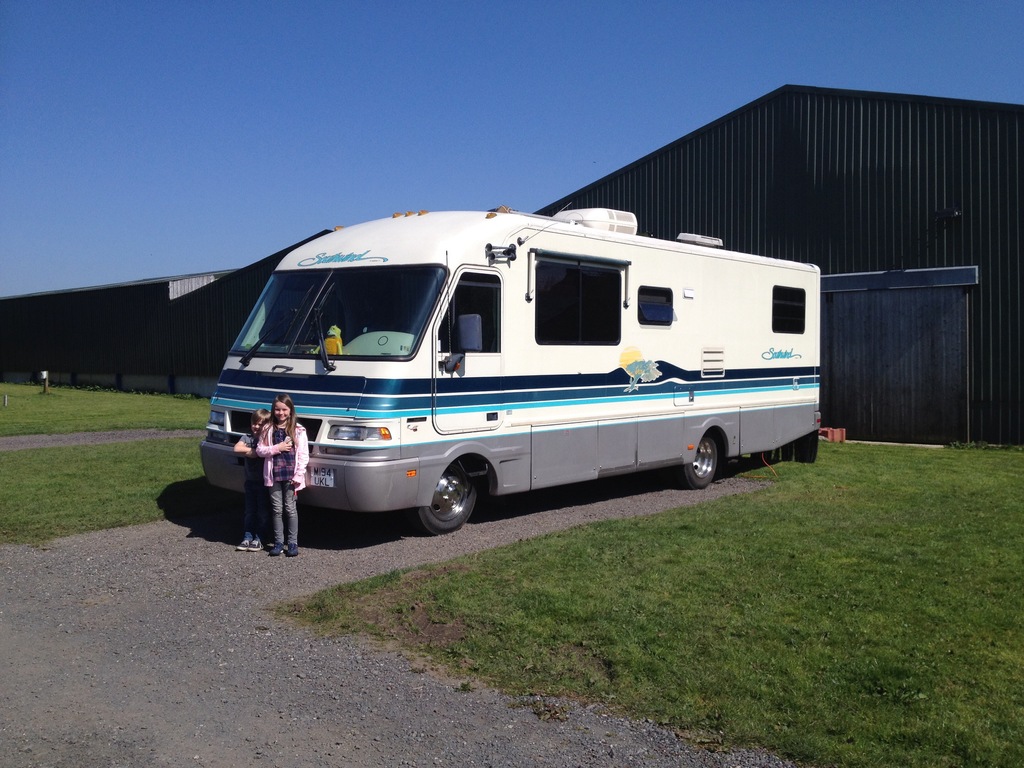 Haha, well I just love "The Brownies" That's what we spent so much time looking for and settled for Blue in the end. At least it has a pointy front, I'm not keen on the coaches they churn out nowadays. Our AC is coming off as soon as I can get a hand lifting it of there. It's not really needed over here and I've got a reversible fantastic fan waiting to slot in the hole when it's gone.

Enjoy your Brownie, they have the best character of all of 'em.

Our Southwind is an 87, and it was a bear cat at the start because mice chewed up a LOT of wiring. but with that fixed, 2 new starters, and other assorted things that needed to be done to an RV that has sat for nearly 10 years ours is running great, I nick named her the MMP (Mobile Money Pit) LOL But that being said, we really enjoy getting out in her. Have to get a new AC unit put in before our first trip this year, so that is going to take a big bite out of our travel money. But these Southwinds are just grand, and I really like the color scheme on yours, ours is a dirty brown with dark brown trim, UGLY is the best term for it LOL.

That's a bit of a horror story right there !!

Re the parking brake though.....I've been toying with the idea of deleting the "auto" feature and just using the foot park brake instead. I think after reading that I'll give it some serious thought.

That aside thanks for the reply and yes, we love the old gal too.

Pete, we love these Southwinds and had one ourself for many year. We were never able to solve and on-again-off-again overheating issue, that to this day still bugs me. We would have kept "her" if it weren't for that. And, it ate a LOT of transmissions, mostly due to the P30 chassis "parking brake"... really a band all around the drive shaft rear of the auto transmission that will engage even at 60 mph; there's less than 1/4 inch adjustment from good to oh my god it's done it again. Of course this plus the overheating tooks it's toll on bout $8 grand worth of trannys; one lasted bout 400 miles from Sacramento to the middle of the death valley. Now THAT was an expensive tow; thank god for Good Sam ultra tow insurance as well as drive train warranty. They paid out over $16,000 in 3 years. Ouch.    You won't have these problems and I know you'll enjoy the rig.

Nice looking rig Pete, Those young-ins will have a life time of memories from the time ole dad drug home that old RV. Congratulations.