It’s amazing how our brains retain a few fleeting, fairy-tale snapshots of scenes from our earliest childhood. I hold maybe a dozen of those odd images which, for whatever reason, were burned into my memory. My younger brother is included in each of those mental snapshots, and in each one he is wearing diapers. Because he is 18 months younger than me, I can accurately date my mental snapshots from the age of 3-4 years old. Most of those memories involve my parents taking us on summertime tent-camping trips to various places in Oklahoma.

Later memories involve the family camping in an 18-foot Nomad travel trailer. I don’t remember when or why or how my Dad wound up with the trailer; all I know is my mental snapshots change from summertime camping in a tent and my little brother wearing diapers, to more luxurious 3-season camping in the Nomad with my newly-obnoxious younger brother no longer wearing diapers. Therefore, it is no surprise that I now choose, almost 50 years later, to live full-time in my rig. I believe I have an advantage sometimes, over those folks who never had the privilege of growing up camping. Many folks struggle with skills and facts I find rudimentary. For example,

* I don’t have a problem with “navy showers”–that has been a simple fact of life, when camping, for 50 years of my life. The six-gallon water heater can provide ample hot water, if you know how to use it wisely.

* I always stock a few bars of Ivory soap, in case I decide to bathe in a stream on a warm summer evening. (For younger readers, you need to know a bar of Ivory soap floats, and all other bars of soap sink.)

* I can cook an entire Thanksgiving meal in spite of the RV’s less-than-desirable oven, and the limited counter space.

* The best tools/utensils/pans are the ones which serve more than one purpose.

* One doesn’t need a TV for entertainment. Many activities, much more enjoyable than watching TV, await just outside the RV’s front door.

* When winterizing the RV, take extra time to do the job right. You’ll save yourself hours of work the following spring.

I remember envying my friends, when I was young. Some would return to school in September talking about family vacations to Six Flags or Disneyland. It seemed the only thing my family ever did was work hard on the ranch, then drag the travel trailer to the river a few weekends during the summer. At the time, I wished I could tell big stories of great adventures to far-off theme parks, instead of simply saying “we went camping this summer.” I was a full-grown man before I began to appreciate my parents “growing me up” in a camping environment.

As a young teenager, whenever I’d have a friend stay over for the weekend, my Dad would drag the Nomad out to the middle of the ranch, set it up alongside a large stock pond, then head back to the house, leaving us kids to find our own fun for the weekend. My buddy and I would fish, swim, cook over an open fire, shoot guns, ride motorcycles, etc. Staying in the Nomad was much more fun than “camping in the back yard.” And, if there ever were an emergency, my grandparents lived on the hill a half-mile away, or my parents on the next hill past that. But I never remember heading back to the house before the weekend was over.

As an older teenager, after I “got wheels,” my buddy and I would leave the girlfriends alone one weekend a month, load the tent-camping gear, and head deep into the mountains for a “guy-weekend.” Sometimes, if my parents were camping somewhere in the Nomad, we overgrown teenagers would meet up with them for part of the weekend.

I tried to instill in my own kids a deep love of camping. But in this age of video games, cell phones, and movies-on-demand, I doubt they appreciate the past-time as much as I did. I took my family camping several times a year. When the wife and kids decided they would rather spend the bi-monthly camping weekends at home, I sold the camping gear in a garage sell and bought ultra-lightweight backpacking gear. For the next 15 years, six or eight weekends a year I would be found hiking deep in a mountain range, living out of my backpack, with only my dog or the occasional backpacking buddy to keep me company. 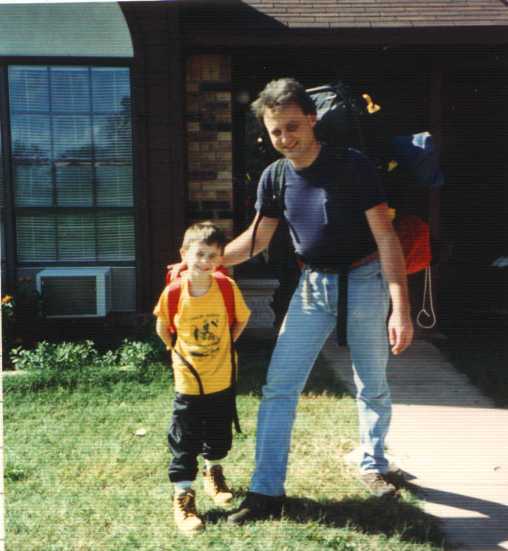 After my divorce (eleven years ago), I continued my regular backpacking trips. I dated several women, but eventually began dating a single lady who owned a fifth-wheel travel trailer. (It seems the only thing we had in common was the love of camping.) For a few months we dragged that fiver every second weekend, all over the states of Oklahoma and the northern half of Texas. She and I didn’t last long together but that experience convinced me that, some day, I wanted to eventually retire to a full-time RV’ing lifestyle. A week after she and I broke up, I had purchased my current rig, an older model Pace Arrow motorhome, with the intention of traveling in it one or two weekends a month. 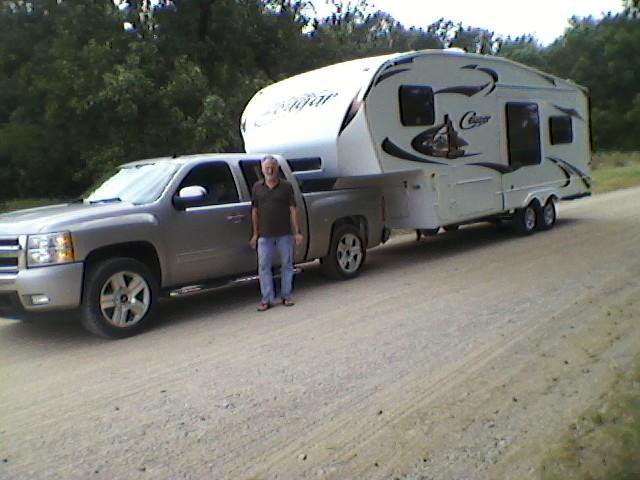 Shortly thereafter, in the bad economy, I lost my job. I was offered a “temporary” job in western Oklahoma, which is a relatively flat plain devoid of trees or anything resembling a mountain range. It was then I moved full-time into the motorhome and drove it to western Oklahoma, planning to live in it for about four months until the job ended.

That job, however, has since turned into a permanent position but I have remained living full-time in the motorhome. I find I don’t want the responsibilities of a traditional home. I desire to remain in an RV the rest of my life. In fact, I recently gave away everything–the furniture, appliances, and other stuff–which remained in storage.

I will soon observe one year of full-time living in the RV. It is one of the best decisions I have ever made. The old Pace Arrow, the Boogie-dog, and I (all three of us beginning to show our age!) have lived through knee-deep snow, negative six degree nights, and the hottest summer on record, with few-to-no inconveniences. Because I am employed full-time, we are only able to get the motorhome on the road for a long weekend about every six weeks.

I plan to remain in this rig for several years. Although it is 26 years old, the rig has been well-maintained by previous owners and only has 47,000 miles on the engine. In any RV, you should stay on top of the minor maintenance issues, before they become major. So I do drop a few hundred dollars a month into servicing the rig, or new window coverings, etc. It is my full-time home, so I want to feel it is well-maintained. When I get closer to retirement, I plan to get a newer rig, in anticipation of living a true gypsy on-the-road lifestyle. 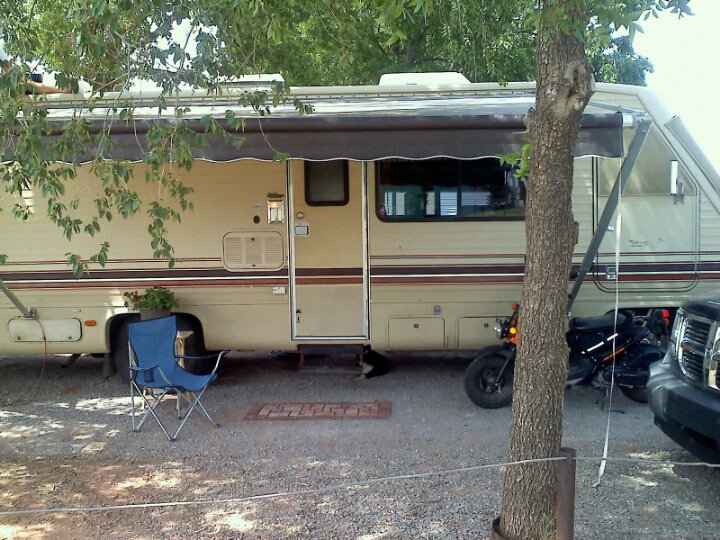 Comment by William Briggs on October 23, 2011 at 7:01pm
Doug and Judy: will definitely make plans to meet you in Kansas in the spring. Keep me informed.

We're planning on being in Leavenworth KS some time in the spring, we would love to swap some stories, maybe we'll see you there. It would be too cool to meet someone from GORV's!!

Comment by William Briggs on October 23, 2011 at 2:45pm
Thanks for the kind words, guys. I would enjoy meeting some of you sometime. I am thinking about publishing my camping plans for the next six months and give all you folks the opportunity to join me. I'm almost sure I'll be somewhere near Rolla, MO, next summer in the Mark Twain NF. But if any of you folks ever want to plan to meet somewhere for a few days of camping and swapping stories, let me know.

WOW. I still remember the smell of our canvas wall tent and trenching around it so we would not wash out when it rained (floor?-what floor). I also remember setting up late, not trenching and waking up to my parents laughing so hard they could just point as my little sister floated out of the tent in a down poor.My wife and I started our your lifestyle this last yearby heading  for one of the get-togethers of this site when 9 mikes out of town we blew a head gasket. We had bought an 86 southwind a year ago,redid lots of stuff (obviously not the engine). So we start next year with a rebuilt engine added to our redone roof, new interior, new brake system transmission rebuild, new fridge along with a plethora of updates. We did everything on the cheap- see the blisters- and couldn't by a used car for the money we have in it.Look forward to meeting everyone starting next year. Screw the economy. We are still alive and going to prove it.

Folks, thanks for reading. I appreciate the kind words.

And, Cade, you are correct. Full-time RV living is much less expensive than living in a traditional home. If you want to know the details, email me privately and I'll share my calculations, and various other rants and raves.

What a great story. I too hope to be free of the traditional house.

Both my wife and I being disabled our "moho" makes living a far site cheaper and much more fun. Thanks  for the story.

thanks for the great story.i would like to do just that when i retirer next year.

Comment by Doug and Judy Dombrowski on October 22, 2011 at 9:11am
Thanks for sharing that. My wife and I have been living in our '83 Southwind fulltime for about 5 months now, we're staying on a friends property in the woods and we absolutely love it. I'm still working fulltime right now, we hope to save up enough money to hit the road this coming spring and start workamping. It's great to hear happy success stories as it reinforces our feelings that we made a great decision. Thanks again for sharing!