Because of the many miles of nearby hiking trails, the sheer beauty of the Ouachita Mountains, the relative proximity to my home, the rich local history, and the fact that noisy boats are severely restricted on the lake, this park and the surrounding Ouachita National Forest have been my lifelong-favorite destination for recreation and relaxation. Cedar Lake Recreation Area is a gem of a park, hidden in the Holsen Valley near Hodgen, Oklahoma. The lake, original camping areas, and many of the local hiking trails were developed by the CCC boys in the 1930's, as a "New Deal" public works project. It is currently administered by the U.S. Forest Service.

This park is somewhat unique, due to its proximity to literally hundreds of miles of hiking, biking, and equestrian trails. One trail, contained completely within the park, circles the lake and is fairly level, making for an easy 2.9 mile hike (just right for working up an appetite, or for working OFF a heavy breakfast). Trailheads to the vast system of trails on Winding Stair Mountain begin at the south edge of the park. 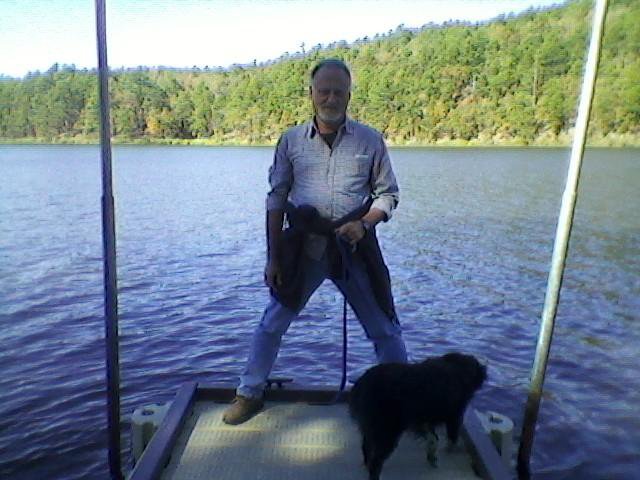 1. North Shore, the original camping area built by the CCC boys, offers 25 primitive campsites (non-electric, centrally-located water hydrants). Parking spur lengths range from 23' to 70'. Seventeen of the campsites are reservable (10 days in advance by calling 1-877-444-6777 or online at www.recreation.gov). Two sites are pull-through, requiring no experience at backing a trailer. 2. Sandy Beach, as does North Shore, offers idyllic views of the little Cedar Lake, nestled quietly in the Ouachita Mountains of eastern Oklahoma. Sandy Beach offers electric & water connections at 14 campsites, with parking spur lengths ranging from 40' to 60'. Sandy Beach also offers 8 primitive sites (no electricity nor water), with parking spur lengths ranging from 23' to 30'. Only five campsites are reservable (see above for reservation information). 3. Shady Lane camping loop, the newest (and in my opinion, the best) campground, is also located very near the lakeshore -- although heavy underbrush and cattails obstruct all but the occasional glimpse of the lake. Very well designed for modern RV's, this campground retains most of the original large trees and much of the underbrush, providing for a feel of privacy and space between the campsites. Twenty-five parking spurs range in length from 34' to 82'. Nine sites offer full hookups (including sewer); the remaining sites offer 30-amp electricity and water at each site. One reservable site is pull-through. A few sites (I believe numbers 12 through 14) are a little difficult to back into with a large rig, due to the presence of drainage ditches alongside the road (though I have accomplished backing a fifth wheel into those sites, without ever dropping into the drainage ditch).

4. Equestrian camping loop, located south of the Sandy Beach camping loop, at the far southern end of the park. I don't have any experience with this particular campground, though it is very large and I understand this park is a prime destination for trail riders from several states. The equestrians access the trails on the public lands south of the park, and are not allowed to bring the horses into the remainder of this park.

Overnight backpackers, day hikers, equestrians, and mountain bikers all access the vast network of trails on the north face of Winding Stair Mountain. Trail maps are easily obtained on the internet. Many of the trails have a rich history -- Old Military Road, Horsethief Trail, and others. All of them are beautiful, especially in the last week of October and first week of November, the peak season for autumn colors on the hardwoods. The trails during the summer season (late May through September), due to the heat and humidity are often not as enjoyable as the other three seasons.

For less strenuous activities, consider visiting the Heavener Runestone State Park, about 30 minutes away. Or take an auto tour of the "Talimena Skyline Drive" which begins a few miles southeast of Cedar Lake and continues to Mena, Arkansas, along the ridges of mountains which rise 2,000 feet above the valley floors. Folks owning high-clearance vehicles (such as Jeeps and certain pickups) will enjoy the many miles of secluded dirt and gravel roads climbing both faces of Winding Stair Mountain. Certain fire-fighting roads remain open for Jeep access.

Black bear roam the area, though they have not yet gained the courage to regularly enter the park. (If you are interested in photographing one, email me privately and I'll disclose the location where they often get their morning drink.) Bigfoot enthusiasts will know that the largest number of Sasquatch sightings outside of the Pacific Northwest occur in this area. Mountain lion sightings are rare, but I have never heard of the lions in this part of the country ever harrassing humans.

In my experience, the most likely critter-danger is from the area's copperhead snakes. Carry a hiking pole or a long stick to move aside brush and other clutter on the trail, and watch where you put your hands and feet. I frequently find ticks crawling on me, from May through the first frost in October. (Me with one of my foster-sons, in 2007, atop Winding Stair Mountain. Cedar Lake can be seen as a small bright white area near the right edge of Snake Mountain, which is in the center of the photo.)

The park staff seems to continually have openings for "hosts" who, in exchange for a free campsite, have minimal responsibilities.

Although the U.S. Forest Service maintains at least three public camping areas in the immediate area, this park is the only one which contains electricity and water hookups, which are preferred by many RV'ers. The other two parks (Winding Stair and Billy Creek) have no utilities and require dry-camping.

Winding Stair Campground sits at the top of 2,600' Winding Stair Mountain, on a cliff. The views overlooking Holsen Valley, and Cedar Lake, are spectacular at this elevation.

Billy Creek lies nestled in a "holler" on the south side of Winding Stair Mountain, alongside the crystal-clear, spring-fed Billy Creek. Billy Creek campground is favored by folks owning ATV's and other off-road motorcycles. Though it is technically illegal to ride the ATV's on the many miles of forest roads surrounding the Billy Creek campground, I hear that the authorities most often just "look the other way" when they meet an ATV on the road.