Hello fellow campers, boondockers, and traveling gypsies, I posted a page yesterday and it seems it got lost somewhere in cyber space, so trying to remember what was said on that post, I will try to regain some of the info on this post.

So after having repaired all the rot on the CAVELCADE, I loaded it on my truck and it felt a little tipsy. So I went to the scales close buy and figured out why. My truck is 6600 lb GVWR stock. Even with the extra heavy duty shocks on the front, 10 ply tires all the way around, and 5000 lb AIRLIFT bags on the axles, the camper was 3450 lbs, my truck weighs 4400 lbs, so 1200 lbs extra was just a bit over weight. So it became my semi-permanent summer home. I left Geneva, OH, with a homemade plywood tonneau cover on the bed, knowing I would find a camper in Florida.

Sure enough, 3 weeks after arriving home, on Craigslist, over on the east coast of Florida, was a SUN-LITE  pop up, asking price $650. I never had one, wanted to try and see if it would fit my lifestyle, so I ventured over to take a peek at it. The owner had it set up to fit his dually. ATWOOD 5,000 lb jacks on the front on sliding rails for avoiding the dual tires and fender, and ATWOOD 3,000 lb jacks on the rear. A 3 month old DOMETIC 3 way refridge, and a 7500 btu wall mount A/C unit on the back. I bought it for $500, and brought it home. Never even felt it on the truck, this was sweet. Got home, took it off the truck, paid for the storage area where work would be done on it, and set out to discover what a rats nest I had bought.

The camper unit was USED, but not entirely abused. Interior veneer was peeling in spots, electric system needed to be improved upon, and the ROOF was in BAD SHAPE. The top was good, but where the aluminum folds over onto the sides, 1/2"X 4"X4' x 2 plywood was very rotted. It cranked up three times before slipping and then not cranking at all.  NORTHSTAR CAMPERS still use the crank system, originally made by a company in Minnesota, the name of the system doesn't come to mind, but NORTHSTAR bought them and want astronomical prices for parts. I tried in vain to repair the roof in time to head north again, and it succeeded to raise three times before finally collapsing for the final time. It got me to Ohio, where I was able to raise the roof, with three other people, prop it up, and decide what I was going to do, make it into a hardwall camper, or dismantle it for scrap.

This is when I found my present day camper, the AZTEC, by HONORBUILT. 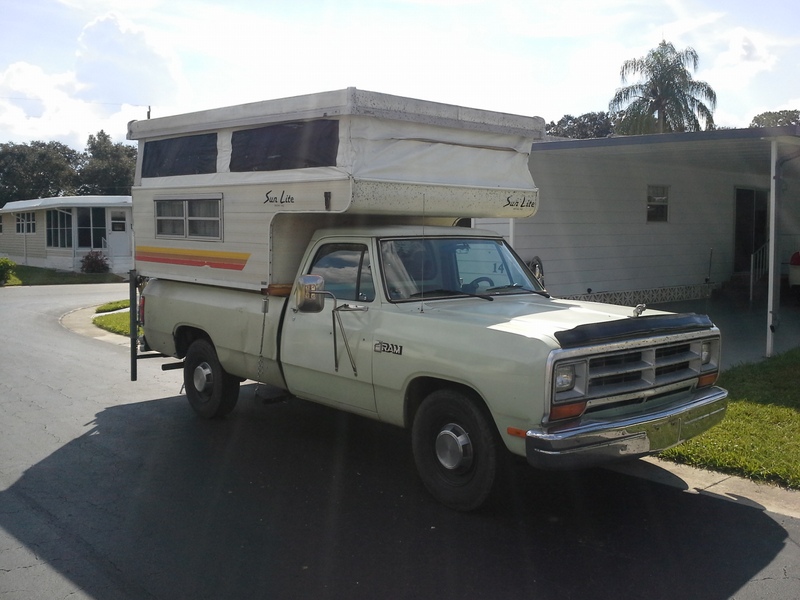 Am I confused? looking at the pic's I'm thinking this is the Florida find which looks to be worthy of some luv. did you scrap this one altogether?

gee the Aztec looks nice. wonder what year it is?