I'm at the other corner now, on the drivers side.  Would you believe I still pulled out..or rather crumbled out wet 2x2's today??  It's hard to see, but I am now replacing the 2x2 supports on that side. I already have one running the full length of the back and that went into there in one piece.  Wasn't easy, but I did not want to have to cut it in half.  I wanted a secure support along that back wall.

I'll be doing the same with the one above it that joins onto the blue insulation blocks above the tail lights. All of that old wallpaper got torn out as well. That was probably helping to hold that moisture in there. 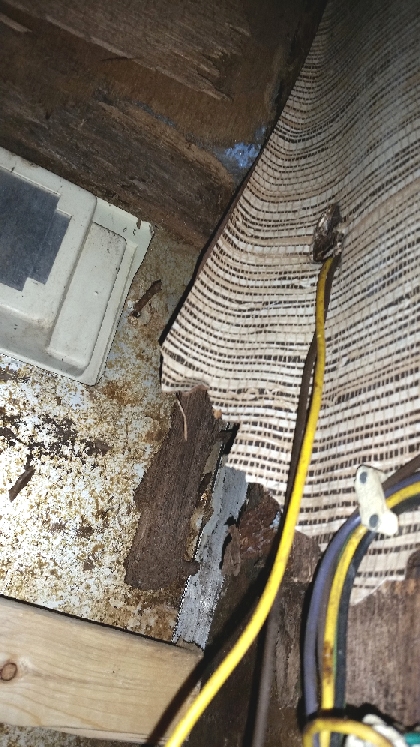 I did have to cut two wires, but thank goodness everything is color coded so it will be easy to join them back up.   A lot of water damage back there on the floor happened through the door of the storage area on the outside that I have to crawl into to fix this corner.  The latch on the door was not tightened, so the door was partially opened at one corner of it. In addition to being kind of warped out of place with no supporting frame inside.  That was rotted.  Water...water...everywhere. LOL  I fixed that with a new latch that fits and will be putting new rubber sealer and new wood around the inside frame. What is there is shot.

So, that is in progress. In the meantime I tackled the closet after I got my framing in on the other corner.  The shelf/floor of the closet was a large piece of fitted 1" plywood and it was screwed into the walls from underneath making it almost impossible to get to. The wiring in the front of the closet that goes down the corner was inserted through a hole drilled into the shelf. You could not remove that shelf without either cutting those wires or cutting the corner of the shelf out. (Which I did)  If anyone needed to work on those plumbing lines or the hot water heater connections, or access plumbing under the bathroom they would have been cussing up a storm trying to get in there, if they could get in there at all.

I made some tracks using 1 x 2's on the front and two side walls for the shelf to sit on top of.  Then I covered the ugly plywood with linoleum and installed a handle to left it up with.  It can be either propped up from underneath for access, or totally removed with a little effort.  It's tough to get out of there because of the back wall being angled and that air vent pipe that it goes around.  But it can be done if needed.  I'll finish up the edges with some trim so it looks nicer too:

Here is everything without the shelf, and then the shelf installed: 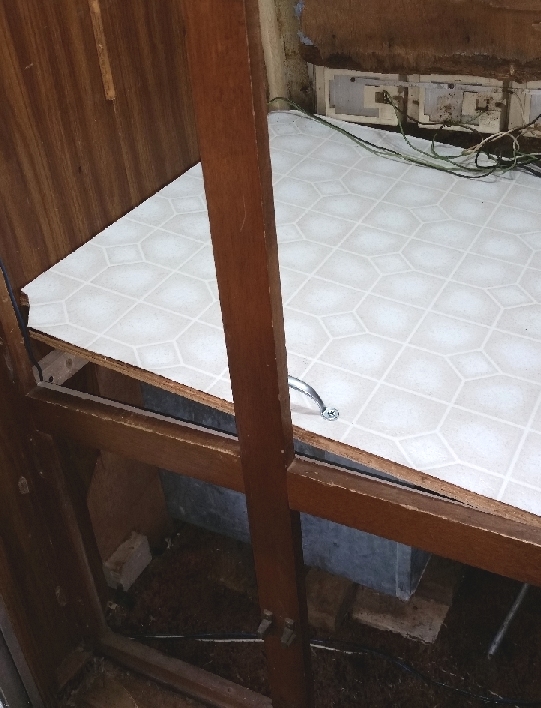 I won't be finishing/adding the back wall until the back framing is done. I might remove that shelf and cut the back length of it by a half inch or so, just to be sure there is plenty of room for it to be removed when the plywood back wall in installed.

Yesterday I did my very first fiberglass fix-it job. The shower floor crack is now sealed up, this week I'll be sanding that down and getting things smoothed up.  I thought it went well for a first time attempt.

The rest of my afternoon was spent and my Dad's, where I spent hours in a hot pop up camper wreck tearing out the cabinets/counters/sink/refrigerator.  Again, everything is screwed in from under the cabinets and there was no way my Dad could have gotten into those places without passing out from the heat. Later this week I'll go back and get the stove out for him.

The wrecked pop up was only wrecked on the top frame and the entire canvas. Way beyond repair.  Everything below that was in pretty darned good condition, only minor water damage near the sink area due to a loose fitting, and the appliances work and look great. He got all of his appliances including water heater and furnace for the '77 Shasta travel trailer rebuild for a measly 40.00. That was the cost of the pop up, and it was hauled to his house for him. As soon as we're done ripping out what we need, he has a friend who wants it and will give him $25.00 for it.  What a deal...all of his appliances and some great cabinets for 15 bucks!  LOL I wound up with a really nice looking shelf/magazine rack unit that is going in mine. And I have dibs on the plywood for the beds.  Large pieces!

I have determined that the person who installed the molding on the back corners was about 5' 8" tall and was either afraid of ladders or the manufacturer did not supply any for the workers.........

As the screws were put in there, they gradually started sloping downward until about a foot from the top they were almost completely facing the ground. This tells me they were reaching up to do it instead of using a ladder and being level with it.  LOL

All of the screws came out fairly easy this time, none were broken headed...but they were sure as hell rusted.  I got the new roll of insert trim yesterday, the first roll I bought was only 3/4"..turns out  mine is 1". So Dad got the first roll. ;-)

Very soon now, I will be in the fun stage.  Prettying things up in there.....I hope.

Guess I'll proof read this post and get it posted....even when I do that I still miss something here or there.  LOL

Break time is over, back to work girlie!!!

Gotcha, I should have guessed that by the other pictures. I'm thick headed some times.

Okay, we agree on the flower pattern needing to be upright. LOL  It's already driving me buggy. I will have to deal with 3 seams along the length of the wall at the window, the wallpaper roll isn't quite long enough to do it two shots. I'll try again...but I don't think it will fit.

Rich, the material behind the wallpaper is the original 1977 installation.  It's all coming out and there is no replacement for it.  It's bubbled and torn in many places, and downright yellowed from cigarette smoke, probably.  So all of the wallpaper will be new stuff.

I'm with Russ on the flowers, I also like the material on the walls behind the wall paper. If that is in the bathroom I think you could rotate the paper and it would look just fine. the two would counter act. Each others lines.

The more I look at it, the more I think the paper should be rotated so the flower pattern goes upwards correctly. Dunnooo.........

What do you guys/gals think of this?  I thought if I have the striping going lengthwise it would make the bathroom appear longer.  Do you think this is too bedroomy for a bathroom, or what are your thoughts? 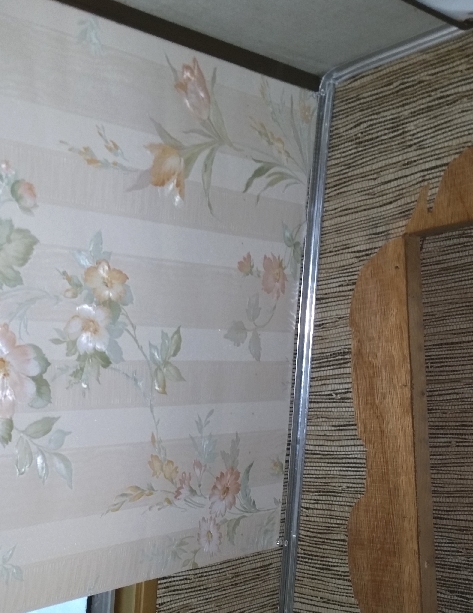 This is where interior design and I have not become the best of buddies, so I will need some yeys/nays.  :)  Just trying to use up what I have available, if it doesn't fit...I won't use IT.  LOL

You are wearing me out just keeping up with your post's I wish I had half the energy. You are doing a great job!

If I never have to step into that closet and contort myself unnaturally again, it will be way too soon.  LOL  The heat wiped me out today for sure.  I finally sat down on the couch, and I'm too tired to get back up to shower and finish laundry.  ;-)

You got it going on Tina.... I enjoy reading your progress and seeing your pictures.. Very impressive... Your gonna be all Pro in no time,(lol). Keep up the good work and pace yourself,, that heat will wipe you out quick..

Thanks Ken. :)   I have only the 2x2's to add, framing the access door back in back there, and new foam blocks to put in on the corner I am working with now.  After those are done, I have to secure the molding that goes across the bottom back.  I've already trimmed it down to fit correctly.  They had one end of it inserted under the molding on the corner.  It was certainly not a tight seal with that bulged area there.

Then the rebuilding part is pretty much done...well as far as repairing damages.  I will be doing some things differently on the inside from what it was originally.  Still mulling around with removing the kitchen counter top....if I don't come up with a fix for the warped area that suits me better. We'll see.

Oh, I have to cut a new piece of plywood for the floor in the outside access/storage area too.   That shouldn't be too hard.