Okay, I'll post some pics and info of what I am dealing with from the start on this. This will be a long term project that I will complete as time allows from work and such.

The engine is solid, and the tires are almost new. When I close the doors on the cab it is solid, I like that sound. ;-)

I don't see any leaks around the windows, but they will need some resealing for sure.

Here are two views of the outside, I won't have a pic of the top until the RV gets here. I'm hoping to have it dropped off tomorrow, but it might not be until next weekend. 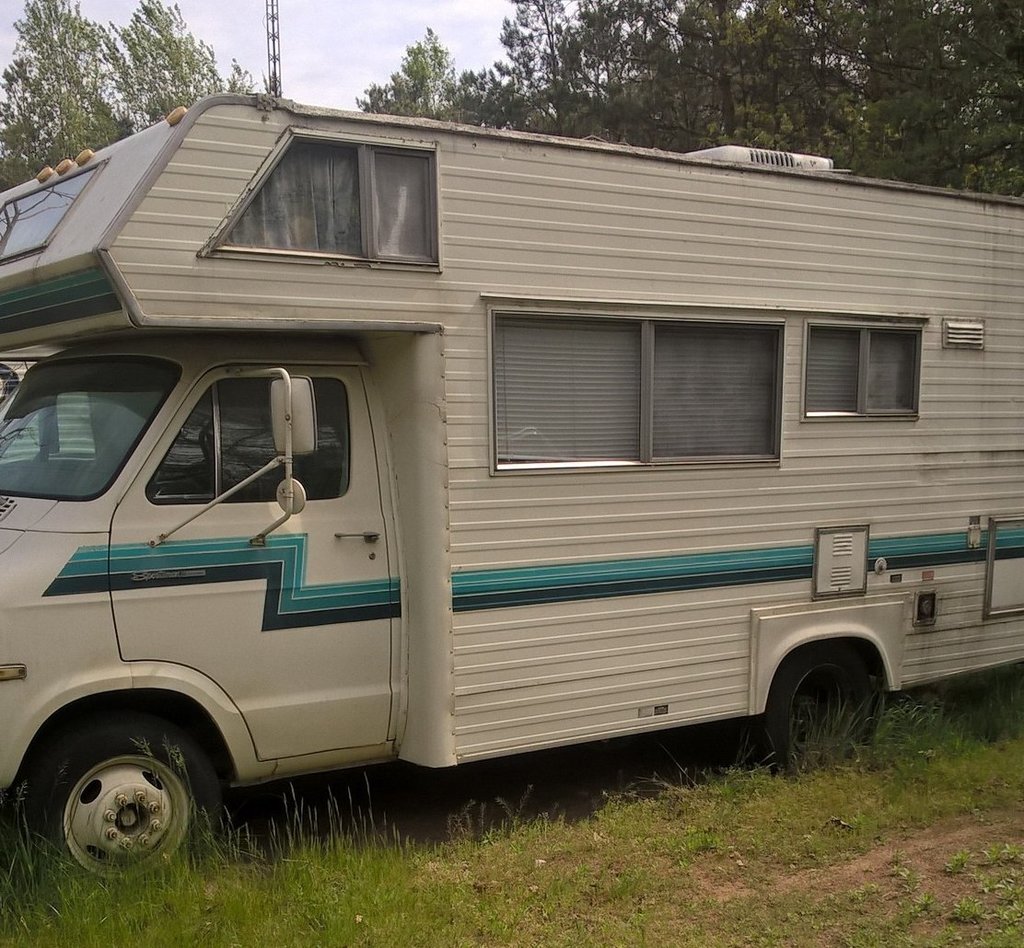 The outside looks good for the most part, and will need a good washing and shining up.

Unfortunately, the inside has been hit by moisture/leaks from the roof and mice damage. It has been stored outside in the elements and in the back country where the mice and other critters are prolific. ;-) I'm thinking most everything will need to be removed and cleaned/repaired or ripped out and replaced.

All of the appliances are in working order, and the plumbing is fine. Bathroom looks pretty darned good considering what damage happened in other areas. It's going to need a serious deep cleaning and scrubbing and I will be replacing the carpeting with some extra that I have here.

First up is the roof and ceiling, here is a pic of the ceiling inside that has dropped from water leak. It had been repaired by my brother when he bought it a few years ago. He said there was no water up there, but when I went to look at it...he pushed on the ceiling tile and got soaked. :-) I expected that, and it was raining today too. Good opportunity on the rain, we were able to locate the water pooled where the antenna on the roof is. The previous repairs were shredded and there is a big dip there where the water is seeping in. That's going to be the major part of this project. 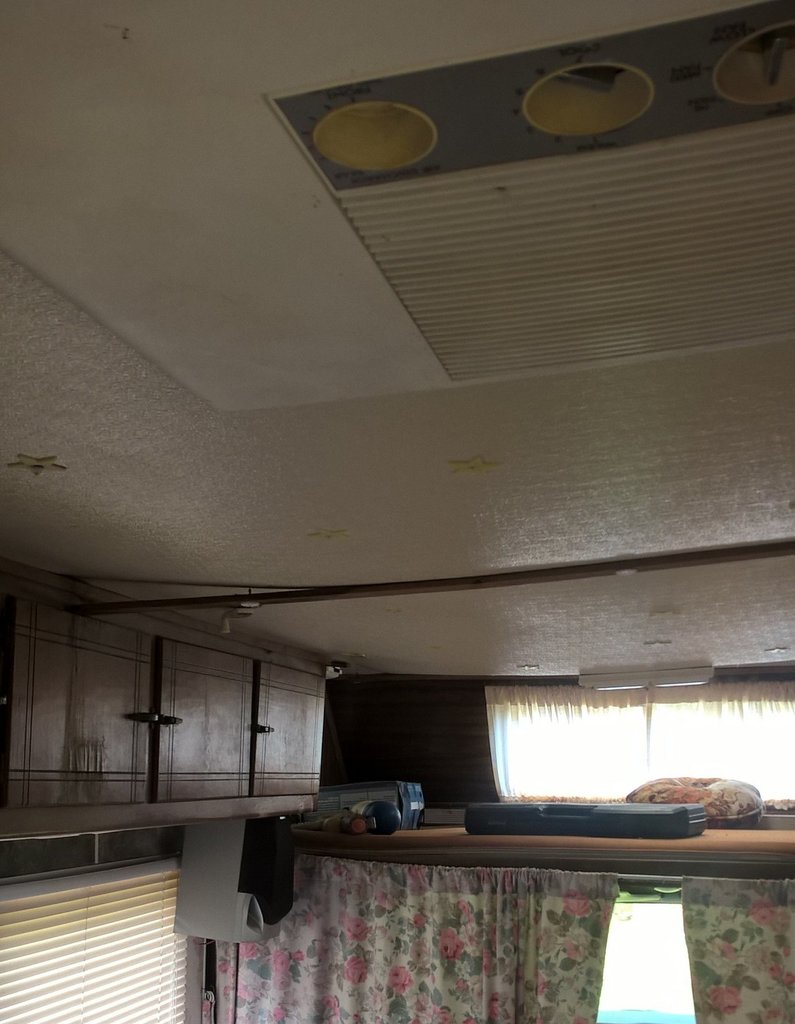 That's it for now, I will update as things get moving.

Great forum and I can't wait to start exploring all of the other members' projects and achievements!

Comment by M K Wilkie on May 22, 2017 at 5:15am
Thanks for the photos. I really admire all of you for taking on these old rigs and making them live again. I have a lot of respect for people who do this rather than go out and get in debt for something new that still has a lot of issues. One thing I have noticed in our more recent '96 is the use of that old chipboard every. You know, the precursor to son that has s lot of wood flakes showing? The stuff that crumbles when you take a staple out or look at it? I had forgotten it existed until we took some things apart in this rig. But now they use acres of luan and particleboard.

I was thinking the same thing Dawn, air down the tires, your hanging around here has corrupted you thought process. LOL

Ha, no, not so limber anymore!  I tarped mine - it's not a bad way to go but it did cut out a lot of light inside.  Was glad to see them off.  Too bad though, parking in the barn would have been great.  If it was closer you could have let a little air out of the tires (remove the a/c unit?).  Just thinking out loud.  Sounds perfect for mine as she's only 9 foot - 9 and 1/2 with the a/c shroud :-)

Rich - I had hoped to go to the Jimco Jamboree but I may have jinxed it myself - just don't think I'm going to have her ready in time.  But next year maybe I'll try your trick!

HI Dawn,
This a 20 footer. I really thought I was going to be able to back this into my barn, it has wide enough sliding doors...however the door is only 10' high, and the RV is 10'...but the air conditioner on top extends that. It won't fit. I have to come up with a plan B on keeping the top dry to work on it. Ordered a huge tarp today, that should help.

That front window is going to be a pain, there isn't a lot of working room up there so be prepared for a back ache or two. LOL Good thing we're still limber, eh? :)

Dawn, It would be a hoot if every one could come together and meet each other. I know the Jimco Jamboree would be the place to be. He has it every year for members of Good Old RV's, I have twice tried to go and twice life gets in the way so this year I haven't committed, I'm hoping that it will confuse the bad jo-jo and i can make it this year LOL. If you haven't heard of or seen the post you should check it out.

Wow!  What a pretty little rig!!  Love those classic mini breadbox lines and that turquoise striping! How long is it?

I have to be sure to keep up with your posts and see how your project progresses.  I've discovered a little soft spot on my overhead - I was going to leave it til next season as I'd went ahead and sealed the roof first thing, but decided after finding it extended further than I thought (and that the window needs resealing anyway) I'm going to go ahead and and pull off the ceiling and front panel and see how bad it is.

Yes, YouTube is OUR FRIEND - well that, and these forums :-)  One day I'm going to meet all these folks and bring beer and cookies for all their support, encouragement and help!

Wow, thanks so much for the responses on my newfound labor of love project.  ;-)

I will take the advice for sure, and have begun to explore some of the pictures and how-to information on this site.

I've been watching restoration youtube videos the last couple of days, and my concern on that roof and ceiling seem very doable for me.  Yes...youtube is my best friend and has been for years.  I do all of my own repairs with the help of youtube, plumbing/appliance repair/mechanical...you name it. If it needs fixing there is most likely someone on youtube to show you how.  I am definitely not afraid of hard work or grease, spiders, mice, or dirt.  LOL

Thanks for the suggestion about the window over the cab, there has been some damage there based on what I saw yesterday. I won't know the extent of it until I get it in my hands....so to speak.  ;-)  I am prepared for the worst.  The comforting thing about this is that I didn't pay but a couple hundred dollars for the RV.  My brother bought a new travel trailer, and he wants this RV out of his yard so he has room to store his new trailer.

My Dad has restored several travel trailers, one of them came from me, and he did a right fine job on it. The have been using it for camping for several years now.  The love it.  So, I should be able to seek a little advice from him now and then as well.  I'll post a pic or two next time I get over there, to show you how they completed the interior.

After being able to physically look this RV over yesterday, I have begun to make a plan to begin.

I would like stay retro as much as I can. With all of my fix it projects the past few years, I have ample left over supplies that are going to come in really handy here.

Thanks again for the comments, I can tell I'm going to enjoy the time spent here.

Take care everyone and I'll post again when I get it here.

Like Russ said it will be quite a job to bring it back to a usable state Tina but it's doable and if you look at it as project and not a chore you will be up and camping in no time. May I suggest a couple things, One I encourage you to check out the Dodge owners group and join up with them they know a lot of the ins and outs of all things Dodge. 2nd, check out some of the projects others have done for good information and ideas. you can find them at the bottom of the page and you can search from a small search window at the top right hand side above the Header. and as Russ said post any questions you have in the general subject forums. there is also a status link where you can do a short overview but your limited to 140 caricatures in that post. Hey, your in good company here and welcome to Good old RV's.

Tina,,, Russ was right on the money with his advice and wise wisdom,, Don't skimp on cheaper materials, cheaper isnt always better in the long run. And Dont get discouraged, Plot out a game plan and take it a step at a time. From the pictures,, the exterior structure looks good. As Russ also mentioned,, check the overhead bunk area.(Front window models are known to leak around the window seals). A Class C rig is actually fun to work on,, your only limited to your imagination. Keep us all posted here on GORV on your progress and dont hesitate to ask the members here for tips and tricks etc,, we are all more then happy to help a fellow RV'er.

WOW, quite an undertaking, Tina. One word of advice, while the entire roof and ceiling are out be sure to do a thorough examination of the cab overhang. From what I have read here on GORV, that overhang is prone to trouble. So read up on here what others have done to repair and beef up that area. Also, YouTube can be a very good friend.

Second FYI, so not skimp on materials. The better quality the wood, fiberglass, etc. you are using the more reliable you end product will be.

There are many people on GORV that have vast amounts of experience. Ask questions, ask for direction, etc. just do not get bogged down in the details and enjoy the beginning of an experience that will prove to be a new adventure and ultimately a way of life--in a good way, not a continuous battle of repairs. LOL.