We traveled down to Yuma, Arizona last week, and I wanted to share a couple of places for free camping.  I am traveling with two other RVers that are planning on taking advantage of 'medical tourism'.  Between us we are getting dental work, eyeglasses and medications filled. Los Algodones is very popular for those things with snowbirds.  Many stay near the border crossing at the Que Casino which offers free boondocking, but is crowded and noisy.  We opted to stay further out and try out some of the nearby BLM land and I'll update on more after this next week when we start heading back.  The Rubber Tramp Rendezvous (RTR) starts the 11th in Quartzsite, AZ and need to get back to Ehrenberg before that to check mail and restock.

We started at Fortuna Pond.  The drive in (at least the entrance we took) made me doubtful.  Four miles down a dirt and gravel washboard road perched on steep sides up above the fields and irrigation canals.  It is an oasis, however, and after getting there, yes, probably worth the drive. Unfortunately, the side that gets sun was mostly full and we could only find spots together on the shady side, so we stayed just the one night (needing solar to recharge–my traveling companion could have run a generator but I have yet to get one).  I have solar on the roof now and two battery systems as discussed in earlier posts - what I have not done yet is finished the wiring to allow the controller to charge the second battery after topping off the first.

We also discovered that morning (coming in late and not paying close attention to well-enough marked signs), we had parked too close to the edge in what seemed like a 'camping' spot but was really a 'no vehicle' spot.  No one said anything to us, but I was glad to be out before getting caught.

It was a balm though to the long weeks of being in the desert - replete with piggy-sounding ducks (they grunt). It is not a perfect spot - very sandy (worse than the desert I'd come from) and somewhat noisy (trains, planes - possibly crop dusting, and other campers, and a few campers left things to spoil the beauty but I would still give it 9 out of 10 stars because it was so pretty. 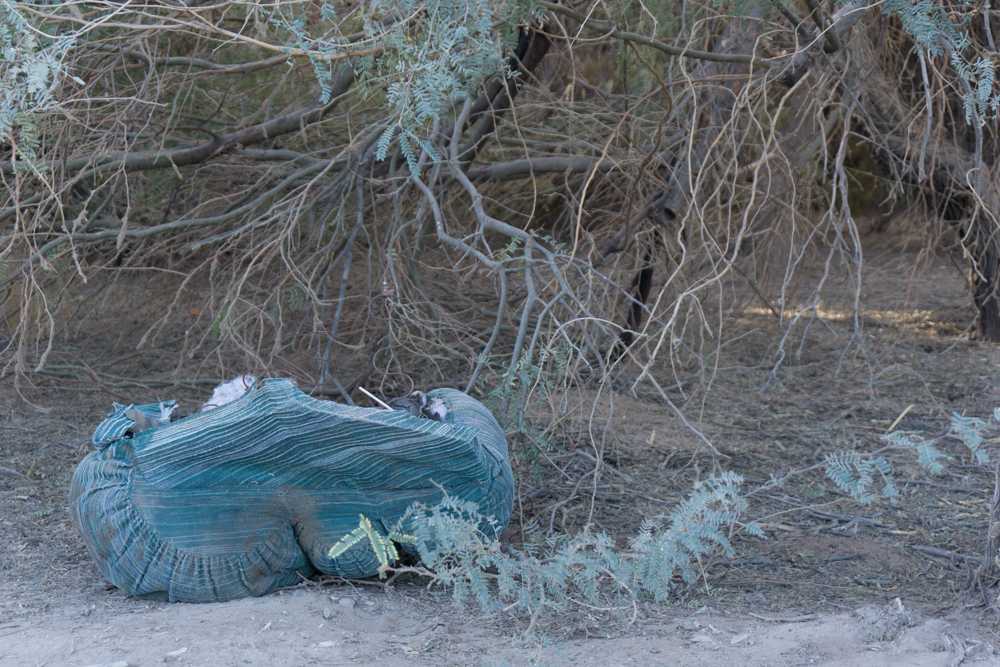 We left sadly, and spent the weekend at Pilot Knob BLM - it's small - the two areas designated, combined, would not be as large as most Walmart parking lots. I understand it is because we are so close to the border. It is two miles down from the Pilot Knob LTVA.

Despite the desolation I saw in pics, and the other RVs (I would say there are about 15-18 others in the two areas), and it's proximity to a rail line, powerlines, the interstate, and the border fence...it is surprising peaceful to be here.  For the first time on my trip I have just sat outside, enjoyed the breeze and read a book.  Of course, I find the desert beautiful.  I wouldn't want to live here, per se - but the constantly shifting colors and textures of the sky, rock and sand, and scrub is, at least to me, soothing. The only issue I am having are with the flies.  They are worse than Ehrenberg.  Who would have thought there could be so many flies in the desert!

And, as always, the sunsets and below, a sunrise, never fail to leave me awestruck. Tomorrow we are leaving our rigs while one person stays to pet-sit and rig-sit while the rest of us go in to scope out Los Algodones and see about getting our differing needs taken care of.  I'll be sure to post a blog article in case any are interested in the experience. Finally, Juno, since leaving Denver has given me no further troubles, including the trip from Quartzsite down to Yuma which was about two hours, then traffic, then driving back out to the pond.  It's still cool though (78 today, mid 50s forecast at night for the coming week).  Other than discovering the black tank leak (which I thought was a gray tank leak) wasn't fixed - and having to do the walk of shame one day four miles into the dump station while it leaked a trail behind me one day, I've had no serious issues to contend with.  I do need to look into one taillight that seems to have a bad ground.  Flickering apparently.

She's been a trooper and a conversation starter wherever I go.  Next week will be time for an oil change unless I wait til I get back and have someone who is going to help me do it (supervise while I learn) and I think I do need an alignment.  All these dang back roads!

Happy New Years all, and hope the pics do some of you having to suffer that cold winter air some good.

Sounds like an adventure Dawn Be safe and happy travels,

Hi there ! Nice reading your blog ! Glad to hear you're good.  The pics of sunsets are a sure reminder of the desert I love. It's fun to keep  up with you ! Still chuckling over the walk of shame ! 4 miles is a long way.

happy new year to you, dawn. I m so glad you are enjoying this new life, and that juno s behaving herself.