She used the old cushions as a template, and we salvaged the vinyl backings and the zippers.  That's five inches of high density foam.  Not cheap, but they cut, wrapped and glued the batting on for us.  It sits well now, but I'm worried it's going to be too stiff for sleeping.  FYI - that shadow between the cab seats is just that - a shadow, not a stain!  And the material is actually more of lime than the light in this picture shows.  So both sides are done now.

The same material will cover the valance above the dinette and this is the curtain material I've chosen for the dinette window: 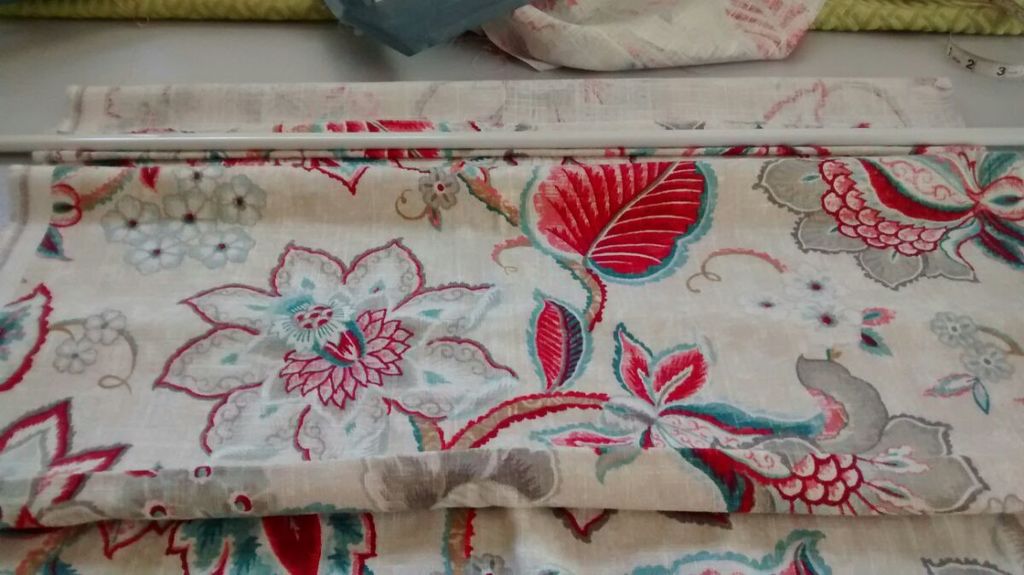 Those are also finished except for the hemming.  I used stitch witchery fabric adhesive to make those since the sewing machine was occupied :-)  Going for a tiki/atomic lounge theme - but I can never stick to themes so will just be eclectic, I suppose, when finished!

The curtains for the loft are currently underway.  On those I went for plain teals - three different shades of blue/green - sort of ombre I guess?  I want it to feel beachy when up there.  The trim with the plastic clips that go on the rails isn't in great shape, but decided to keep those - and here's the old sewing machine I'm working on (which works just fine).  I'm not fond of this task, however - especially the gathering for the pintucking -  so glad my mom is helping! Per my last discussion - I replaced the two outlets and fully inspected my electrical system.  The 12v receptacle didn't work, but it's possible a toggle above the bunk controls that.  If not, I'll replace it when I start wiring in my gadgets.

On to plumbing - I managed to get the city water inlet changed out, a diverter added to the city water line, my housing box built for where the pump was moved to, the leaking water valve module off the toilet (without removing the toilet!) and after a couple of tries the right part in to replace it with.  I'm a little aggravated with Thetford's customer service girl who was short with me (I have to go to lunch  - and then closed our chat window without so much as a by your leave) and told me the wrong part, however, that said I told her I had an Aqua Magic IV (that's the brochure I had in the owner's papers) and I actually have a V.  The video below was a great find - shows me exactly what was wrong (the PO didn't winterize so this is the type of leak I had) and what I needed to do step by step (and was actually the same part) so I recommend it:

FYI - I did try fixing it with epoxies that were recommended with no luck.  It's a twenty dollar part off Amazon and as I said, I was able to remove it without pulling the toilet (I'm going to wait til I redo the flooring to do that ).

And, finally here's the housing I built for the water pump: 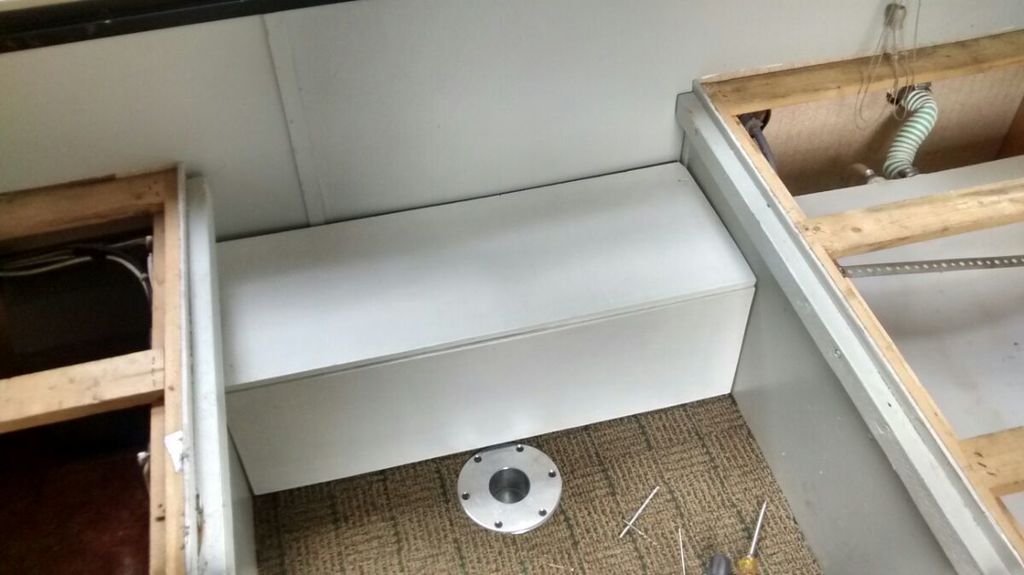 I thought a lot about this - I know this cuts off seating, but normally there will only be one or two people camping and if a third, we can pull the chair up to the end of the table.  If we do end up with two people one one side of the dinette, the person on the inside can put a leg up and extend it, as a second board, the same width, will ride above this on the bed rails, and I'll put a cushion on top of that so with the table off it will function as a u-shaped dinette, or that end as a chaise even for tv watching.

The box top will be a shelf for a few of the electronics (like weboost and solar controller mounted on velcro).  The wiring for that will run into the dinette box to the left without ever going into the housing - there is already a 12v there.  Can access it easily enough then to see when I need, but not cluttering up the little wall space I have.

The top and the front of this box is velcroed on so I can access it easily and quickly (both diverters are in there as well).  Now the left hand dinette will be totally electrical (converter, battery bank and much of the wiring harness) except for one water line which has two elbows and I'll be further protecting with some sort of sleeve.

The velcroed panels also will allow me to adjust when I replace the carpet with those vinyl wood-look planks.  The carpet is not in bad shape at all - looks new, padding underneath nice - but the color, eh, I am leaving some of the brown for now (table and kitchen counter), but this is just the wrong vibe for what I'm going for.  Actually it would have been perfect for that sort of rustic classic camper with pine greens and plaid...but, I didn't go that way!

That's it for updates - appreciate those following along, and especially appreciate those helping me with advice on the discussions.  Seriously, reno'ing this rig is turning into a group effort!  I would not be so far along (and probably many more mistakes) without you all.

I promise when I'm done you'll get a full video tour!

Awesome update! You are doing great. :)
That sewing machine is one of my favorites, I love to sew.
And kudos to you for keeping the original zippers etc. Those aren't chea and getting the right size can be a pain.
I love the pump box idea too.

Comment by M K Wilkie on June 18, 2017 at 9:54pm
Great progress. I love the lime cushions. They look great. Your machine looks just like a woman's machine on another site I'm on. They're good. Not modern junk. Your writing is top notch. Very organized and easy to follow!

AWESOME progress.. A little imagination and persperation and it looks as if you have it all coming together rather nicely. That pump box under the dinette looks great, and the idea with velco is a great idea, easy access... Looking good..

Started by Brian Walther in General Discussion Forum 20 hours ago.