Sooo....I was told during a conversation yesterday with someone offline that a simple haphazardly installed bracket for a CB antenna could not possibly have caused so much devastation and damage to the cab over.  I giggled....really....I did.

Of course, this prompted an official investigation for proof of the matter, including eye witnesses and photographs of the scene.

Can I get a witness??

The investigation provided enough evidence that the accused (the bracket) was clearly at a loss for any other explanation and plead guilty to the damages. Thus leaving the naysayer repeating to himself:

" 'Tis better to close mouth and appear to be a fool, than to open it and leave no doubt".

There are two things that were the leading causes for the major damage, and the proof is in the lining up of the worst damage to the suspects in question.

Here is the inside ceiling of the cab over, you can see the pieces of 2x4 that are completely rotted....and whaddya know?  It's directly under the very spot that the CB antenna bracket was installed on the roof edge. There were no other suspects in the area at the time. 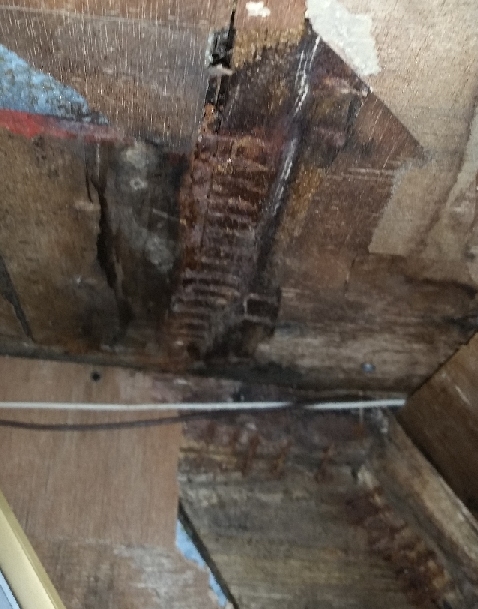 The second leading cause was the sealer stripping in the channels being pulled away from the bottom corners where water pooled and made it's way through the screws. (IMHO)

Then, there are the rest of the idiotic things such as the lag screw to hold the regular antenna to the cabover so it wouldn't flop around while driving.

Update now is that I'm piecing one by one the cross supports to the 2x4's using 2x2's and corner brackets.They will also have the T-Channels on top of them as soon as I cut them to fit.  This is going well, but it's neck breaking work.  I think I will, in fact, be able to survive that Zombie Apocalypse for a little while after this ceiling is done.  ;-) I've had to buy some more wire brushes to clean glue and grime off the aluminum as I remove the old rot.  This will help any gluing needed to adhere better when I'm ready to rebuild in the cab over.

Here's the corner I'm dealing with now, behind the passenger door.  There was a major gap there where silicone sealer had fallen off. Little by little and as I get time, this will be ready for the makeover. I will not be removing the "floor" of that.  I have a plan to take care of any gaps where rot was removed after the frame is in.  Then a topping of 1/4" plywood will cover all of the ugliness. 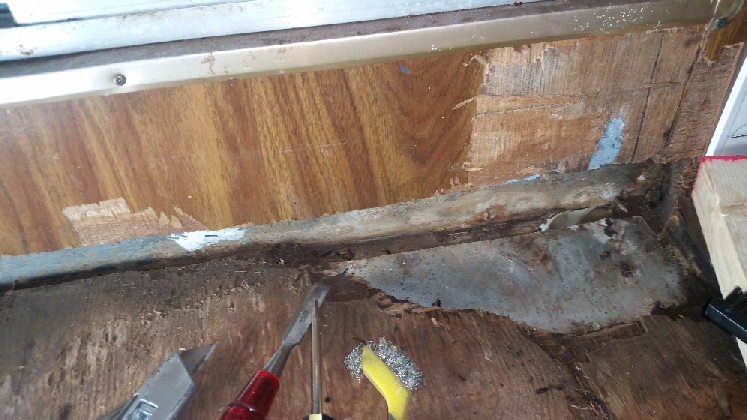 I got the drain vent ordered for the rebuild of the heat duct area.  And I got lucky, my Dad had a small sheet of 1/4" plywood in his work shop that I will be able to use to build the box.

I should have a productive day tomorrow.

Hope everyone is well and staying cool in the heat waves out there.

I am sufficiently worn out for the day.  The vent box is complete, but it can't get put together until I get the drain vent here.  I need to drill the hole for it, and it will be MUCH easier to do without the box walls in the way.  ;-)

I have determined the little Dewalt cordless skill saws would be just fine for something thin like paneling, but don't try to use them on anything like 1/4" or more hardwoods. They just come to a stop trying to get through it. LOL

I always wondered why I had a wood rasp in my tool box, but sure glad I did.  It came in quite handy for smoothing off edges from my first cut with the Dewalt.  From there I went to a standard skill saw.

......And get me to the glue on time!  I realized a slight calculation error I had made, there were  a few cuts I needed to do with the plywood to accommodate the rise of the wheel well, and the thickness of the water lines in the back along the wheel well floor.  When I realized what I did, I ran out to remove the 1x2 that I had glued and nailed....if it were just the nails it would have been easy peasy.  That liquid nails held strong and had already almost fully dried. Half hour more and I would not have been able to get it apart without ripping up the plywood.  LOL

Hope everyone had a great day.

We would probably be a bad influence on each other, Lakota. LOL

I have decided this morning, that If I ever built an RV from the ground up, I would use 2x4's that have plenty of knots in them.
I just spent an hour trying to remove a piece of rotted 2x4 in a corner of the cab over because the screw was smack through a knot in the wood...that knot was not (pun intended) rotted. Perfectly strong. LOL

Started by Brian Walther in General Discussion Forum 22 hours ago.