Hopefully she'll be back tomorrow but it's been one of those things - seals came in wrong twice and then, because the place I found to do this work manages a fleet, fleet emergencies get priority.  They are at least checking out my tires to save me that trip to the tire store to make up for the delays.  The PO said they were new, and I think if I'm reading the DOT number right they are, but I want to be sure and also have them check the inside duallies as well.  Also weirdly, the RV fixit place recommended a tire pressure that, after doing some research, turns out to be underinflated, so having that corrected.  Door says 60, tires have 80 psi max, and since I don't know my weight and we're going into winter the consensus seems to be 65.  The RV place had set them at 55...  There's one of those weigh/scale opportunities at an event in Kansas-if I can make it there before the 18th I can get Juno properly weighed, all four corners, and will adjust from there.

The new mechanic also recommended I replace all my ball joints because the boots are cracked - big expense that would have had me dipping into my emergency fund before even getting on the road so I went back to my old mechanic and asked why he didn't recommend it.  I decided after talking it over with him I'm just going to keep them greased until I need to replace them (the joints themselves are showing no signs of wear - it's just the boots for now).  If I'd had extra money in my budget I might have gone ahead and had them replaced but for now just going to keep an eye on them.  Hey - if Pippi Peterson can wield a grease gun, so can I.  Um, just as soon as I figure out where to grease exactly...:-)

So down to the short list ... things like replace the awning saver (already have a hole in new awning as I thought the rv place fixed it and apparently that didn't happen - oops) and add the ability to secure the camper chair while in transit.  There's more than that, but things in that vein.

Last weekend I washed her, went over her completely with a couple of clay bars and then nu-finished her. My arms about fell off, but at the end of it she looks much peppier than before.  So far have been unable to find the right size rigid insert trim (screw cover trim) to go around the genny bay and the door.  If anyone has any ideas let me know?  Seems I found something close but it costs $15 to ship and it's not close enough for me to want to take a chance.  Any alternatives to that stuff?  Just silicone seal the screws and leave it alone? 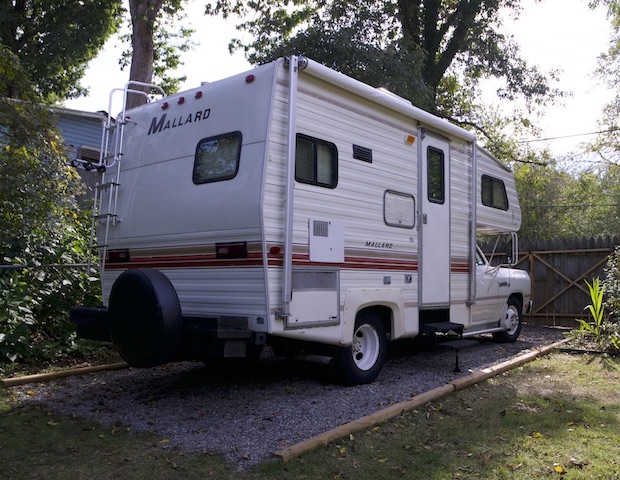 I'd hoped to have interior shots and a video by now, but best laid plans...!!

Thanks John.  I'll take  a closer look at the tires - I have no ideas which ones I have but there is a "caveat" written on them about the 80 lbs.

Dawn, one of the WORST enemy of tires other then weather checked and cracked, is HEAT caused by under inflation causing the sidewalls to flex and generate heat. In my opinion its safer to OVERinflate versus UNDERinflate. Load Range E tires as you say are labeled for  MAX load at 80 PSI and Id rather carry more then less air. Also if the VR  came with Load Range D tires  they DO NOT carry 80 lbs so maybe that's what the door labels indicate??? If I had Load Range D tires Id run at 60 or 65 but if Load Range E Id run 70+ or even 80 SUBJECT TO THE ACTUAL WEIGHT. Don't drive up n down the road UNDERinflated

Richard - I'm going to remember that story, for sure!  I knew about the required tilt when out, but it NEVER HURTS to remind.  That image of you trying to get 500 lbs of water off and out and the camper leaning is priceless.  And, also need to remember to not leave it down unattended (esp out west) even for a short short.  We lost the awning rails on our Bounder to such stupidity.

Of course the Bounder we just bought, moved in and tried to figure it out as we went.  Easy come easy go (okay, not really - but I think when you reno something it increases exponentially in value with every curse word and time you pull out the wallet).

Hey Dawn,,, Im going to pass on some serious Redneckery solution to your trim around the geny door, (Hope your sitting down and not reading this on your phone while cruising at 75 mph in heavy  traffic).   Are you familiar with vinyl window blinds? Those slats are the bee (elbows) knees,

I could not find trim for any of my storage compartments and windows, without putting a 3rd mortgage on the RV. I think the RV places think its plated gold. It may sound funny, but I just cut the slats to fit with a slight arch and put an adhesive sealant to hold them in place, You can laugh now,,,,  BUT,,, It has lasted 6 yrs now and havent lost a piece yet,,, even under high winds crossing from Ca, to Texas.,, Now take into mind,, this is just a suggestion.. When I got into a pickle,, I applied my Redneckery intuition.....

I'll pursue that - it's the "other" brand I could find (although didn't realize walmart had it) but doesn't have measurements even on the pdf that RV & Auto Parts sent.  However does have same naming conventions.

(not worried about color - can always paint)

Unfortunately not in store or available for pick up in either my area or denver. But might be able to return it to store...and get some money back.  Can get free shipping if I find more stuff to buy :-)

I'm going to head to camping world today or monday to get propane and spend a $15 gift certificate - see what they might say (i know premium candy store pricing) but if nothing else might get some bad advice.

Wal-Mart actually has one for 2.47 not sure of width though

Wow, appreciate that Robert ...but I'm thinking that may be to wide? That converts to .875

To give you an idea of the closest I came in hunting:

isn't quite the right shape on the sides but I'm thinking it would still work, but it was a thinner at .460

You can see my conundrum.  I suppose I could go smaller and use some sort of adhesive caulk...

I am in Charlotte nc and think I have some extra trim. It is 7/8 and it fit my 421 honey. Email me an address at rbeesley1@gmail.com and I will mail it if you want.

Best of luck, Dawn. Enjoy your shake down and points west, and most important, be safe.

I get the impression you will deal with any problems down the road.

Thanks!  She won't be winning any awards, but she'll be clean and tidy.

Yay, she's finally back from the mechanics and we started on the last items on the list.  Found some things to add to it. Hazards aren't working, and they were, so hoping i just have a jiggly fuse since the mechanic futzed around a little with the electric.  The nonworking reverse light is going to take more research, though - actually looks like some wires aren't coming through to the plate that contacts with the bulb (comparing that to the working one) which means removing the whole housing.  May leave that til after I get where I'm going.  I still have that front parking light problem I haven't run down so can tackle those two the same weekend.

Awning saver took a bit of creative thinking to install, and it isn't the prettiest, but looks like it will work.  As far as the screen door don't see how in the world that little plastic disk was going to be affixed.  Supposed to screw but no way it was going to go where it shows.  Ended up jb welding it but then ended up too low so grumble, I am going to have to be very careful with that.  If I get the awning up high enough not an issue but of course there's always the day I'm not paying attention!!

Next three days are going to be busy while I finish up loose ends but there's a nice little campsite overlooking a reservoir as my reward!