Because I have a lot of things to sort out on my new-to-me-rig, as well as a limited budget, there are some places I'm going to have to make some compromises, at least initially.  Juno came with two ceiling vents, but no fans.  Decided that was something I had to modify, and I did consider replacing them, but ultimately decided for now to rig fans into the opening.  This is by no means either pretty or convenient, but it's workable and will save me about $400 I can spend elsewhere.  Following are the photos and a few things I learned on this project.  Thanks everyone for your help getting me sorted out on the discussion I posted!

I've only done one so far - I started with the bathroom since after taking down the garnish I discovered there was already a 12v wire looped into the opening.  Both vents need the seal replaced at the top, but for the time being because of the rain she's tarped again.  So ultimately I can't test how well the fan will work, but I feel pretty good about the operation of the fan out of the box.  Here the garnish and insert is along with the 12v RoadPro fan I picked up on Amazon for about $30.  I think it's the same as the O2Cool fan everyone used to get before they went AC/6 D cells. Sadly more expensive and not reversible, but it has two speeds, airflow is acceptable and I dropped it hard twice and it didn't break, so guess it's made well enough! I cleaned the pieces, then wiped them down with mineral spirits, and taped, and then drilled the holes where I anticipated putting my eyelets (where I'd hook the bungees into).  I used smaller drill bits first and then reamed out the holes a little but I probably didn't need to be so careful on this trim.  It didn't crack or threaten to.  I had positioned the fan in several times to measure how far in from the corners I was going to put them (2 inches on the bottom of the fan, then 1 and 1/2 from the rest of the corners).  One thing I didn't take into account was that the fan's plugin is on the side and how far the connector sticks out.  It works but it's a tight fit and my bungees were measured for the fan to sit in the center of the frame –and it ultimately had to be seated to one side to accommodate the connector.  Fortunately bungees are forgiving. 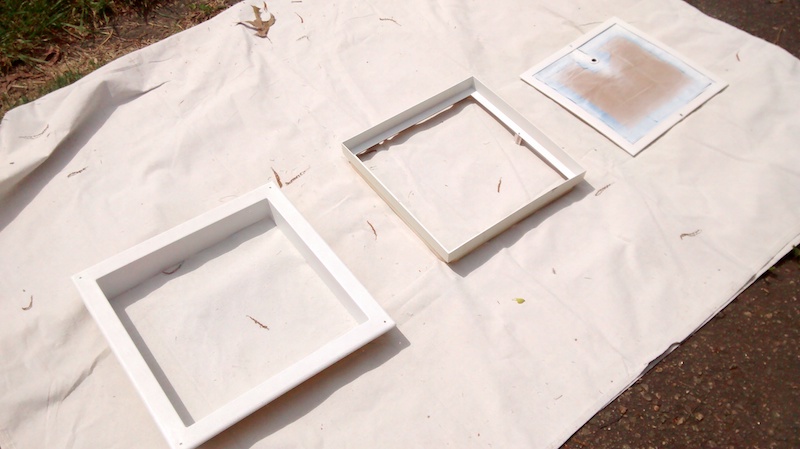 The pieces painted up nicely.  I used Krylon's Fusion for Plastic in white satin and only painted where the trim would be visible - should have half a can left for the second vent.

Now my goal was to be able to remove the fan and use it in the cab, but for various reasons I decided not to on this vent and clipped off the male 12v connector just leaving the connector that plugs into the side of the fan.  I did plug in the connector into my car so I could test my wires and figure out which was positive and which was negative (and black wire with white dashed lines was positive like expected).  Tested my voltage on my wires in the RV and as expected white was negative and black was positive.  Because my wire was 22 gauge and 12 gauge I went with wire nuts, taping for a little extra security.  There was just enough space between the garnish and the wood framing to tuck all the wire back in and taped out of the way of where I was going to drill pilot holes for the eyelets. I left the connection wire long, because reversed, the connection point will be on the other side of the vent.  Yeah, I know, that wallpaper has got to go, but it's a little farther down on the priority list!  That new painted vent sure puts the rest of the interior to shame, though - lol.

It was then I realized, doh, that my eyelets weren't going to be long enough - I had in my head the garnish sat up against the wood frame, but there's a good quarter of an inch space between.  So back to the hardware store where all the longer eyelets had heads that were too big.  So I had to come up with another solution, that I'm not as happy with as it's more visible, but worked - and that's to use long screws with ring hangers. 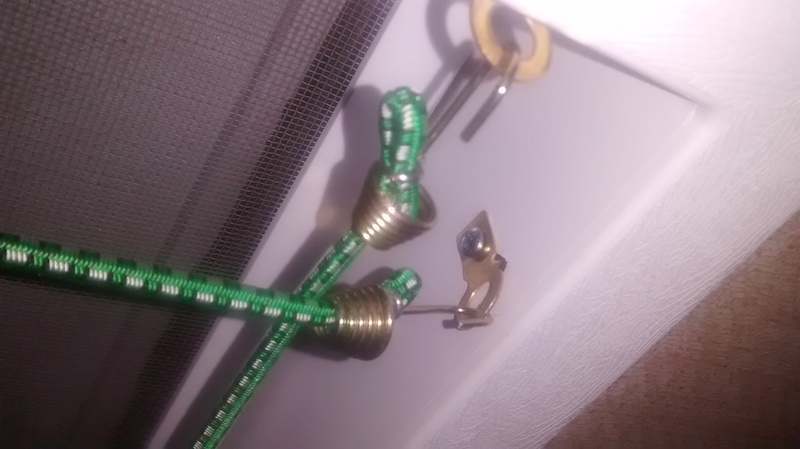 And here is the final - how it fits the best, with it pulling air in using 10 in Harbor Freight cheap-bucket-o-bungees.  I used 3M wire clips on the side of the interior of the garnish to clip the excess wire: 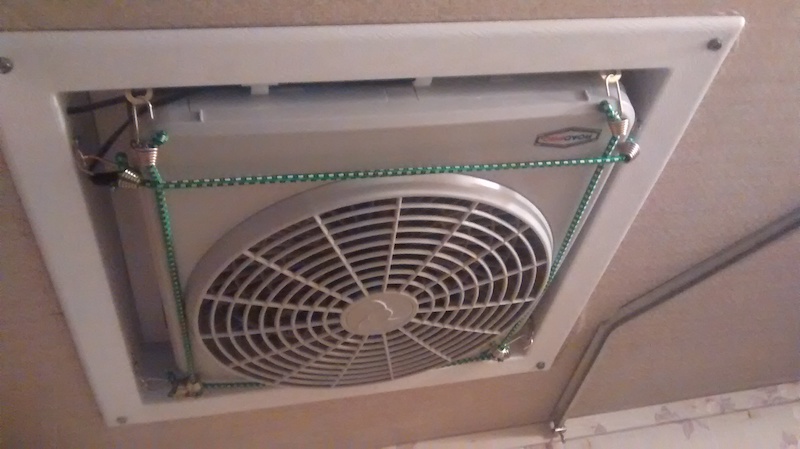 Now, exhaust (necessary in a bathroom!) didn't work quite as well.  When turned over, one can see the fold down handle, and it doesn't fit in the opening as well because of the shape of the fan.   Additionally, in the picture above, there is plenty of room for the crank because the back of the fan is indented.  When flipping it, I have to unscrew the crank and remove it.  And the bungees want to push it up and the grill catches on the little bit of the crank that still protrudes.  If it starts to rain it's going to take me more time to get it down as I'll have to screw the handle back in first.  Also, trying to reverse it is when I dropped it twice!  Trying to slip it in the bungies, left hooked, didn't work as anticipated.  It was easier to unhook four of the sides and rehook while holding the fan in place.  Finally, the battery compartment covers on this thing have no grabbing power either - they keep sliding off in my hands trying to maneuver it.

I ended up not needing clips on the face of the fan to secure the bungees- it's not going anywhere - all the little protrusions and the bungee hardware keeps it well secured.  I think the only other thing I'm going to do is watch for some light gray bungees that won't scream 'lookee here!' and that have better connections at the end so they'll lay a little better.

Overall I'm pleased.  Time will tell if it does the job I need it to or not!!

Wire Nuts - because I didn't have any the right size $2.28 from Lowes, assorted

Eyelets I can't return because I opened the package, $3.00

The wire crimper the guy at Ace talked me into: $17.98 (but it is as good as he said it was for stripping wire and I was struggling with the one we had, so good investment).

Took me a day because I had to go to the Hardware store twice, kept not having the tool I needed (made about thirty trips back and forth from basement to RV,) and then had an interruption during the afternoon when the beekeeper came to retrieve a honeybee swarm that had taken up residence in our japanese plum.

Dawn, I think you should be pretty proud of your very good common sense vent fan modifications. They work and the price was right. Important thing is to enjoy your rv and the restoration process "over time". it's  a lot more fun that way hunting for "bits and pieces" as you go down the road..   Sure enjoyed reading your post above. Nice job!

Started by Jimco_W001 in Vintage Camper Parts For Sale 16 hours ago.