I have a list of wiring projects to tackle, but being a complete novice when it comes to electrical work, I thought it best to start simple.  I've been youtubing for weeks making sure I have a basic understanding of wire gauge, types of connections, and concepts such as grounding.  I've been filling my toolbox with gadgets, a multimeter, heat shrink, a pair of rubber gloves and the like.

Today I finally took the plunge.  Everything starts with a first step, right? And sharing here in the event it helps anyone else who is in the same boat.

Juno is old enough and basic enough not to come with any gauges so I figured the place to start was a battery monitor.  I'd already pulled out the house battery and am keeping it in the basement hooked up a tender/trickle charger. The battery that came with Juno was an Everstart series 27DC - I'm kind of glad to have the bare bones sort of battery as I can justify cheaper things such as...

...this monitor - i liked this one because seemed simple enough for me to wire, pulls a negligible load, it will fit in a place already existing in the dash, and there were a couple of comments in the reviews that clued me in on how to calibrate it.  Some come with a visual gauge, but I found a basic chart explaining voltage numbers for running an RV system, so figured it would make more sense to get a voltmeter that showed the numbers:

12.06   50% - can take it down to here, but perhaps not a good idea to do this consistently if you want to try to get the most extended life out of your battery

I started out at Ace Hardware - they just put one in a few blocks away and everyone there is helpful.  They even have several women who work the floor.  Today I got a girl who was an electronics technician in the military.  How lucky could I get?

She reassured me it was as straightforward as I thought - she took a look at the monitor I brought in and verified positive and negative (doh, there was a label) and recommended 14 gauge wire. We talked about how much wire to strip off the ends, how it fits into the connector and screws down, whether or not she thought I'd need an inline fuse and also recommended butt connectors that would fit the battery terminal screws.

I went with a short length of wire - when it's time to wire it into the truck I'll redo it - this was to practice.  I also didn't go with an inline fuse, but am thinking I might when I do the final job just to have done one.  Red for positive, black for negative and I was ready to do this.  One day I expect to get so savvy I can salvage wire from unused gadgets :-)  For now though, happy to have the help.

The initial wiring went beautifully.  There really wasn't anything hard about it.  Positive to positive, negative to negative, strip one end to go into the monitor connectors and screw them down, the other crimped into the circle-style butt connectors which fit down over the posts and simply secure down with nuts (and washers when I do this in place). My crimping tool seemed to give me a solid connection despite my concerns I wouldn't have enough hand strength.  The only fussing about I did was trying to figure out exactly how the wire went into the monitor clamps.  Seemed the metal bit was in the middle of the connection opening and the wire could have gone between it and the screw or on the other side.  I decided closer to the screw made sense since it in effect was doing the biting when tightened.

When it lit all up in its blue 1/2 inch LED glory I was all congratulating and high-fiving myself. Clamped my battery tender/trickle charger clips back on and watched the voltage creep up past 14.  Ah, that's right I needed to calibrate the meter.

Soon after...snap, crackle, and pop...I learned my first major lesson in electricity.  I burned out my multimeter leads.  Lesson?  Unhook the battery tender before testing.  An couple of hours and several stores later I learned the second lesson of the day - universal replacement leads for multimeters are hard to come by, and dadgummit, my $9 Harbor Freight multimeter was an awesome deal.  $17 dollars later I have a cheaper multimeter with less 'multi-functions' - but at least was able to finish my project.

On the back of the voltage monitor, just like described in one of the reviews were two screws - one for "coarse" adjustments (W) and one for "fine" (W2).  You just have to have a small enough screwdriver to turn them.  I did as recommended and kept pulling the voltmeter off the battery to make my adjustments and putting the leads back on and retesting, but after about seventeen times I held my breath and carefully adjusted it while attached.  Perfection.  Multimeter and voltage meter agree.

I'll have to test once in the field to see how accurately it performs but I am optimistic as it gets good reviews and from what I can tell it seems solid enough, well-soldered connections, etc.  Here she is in all her happy blueness. 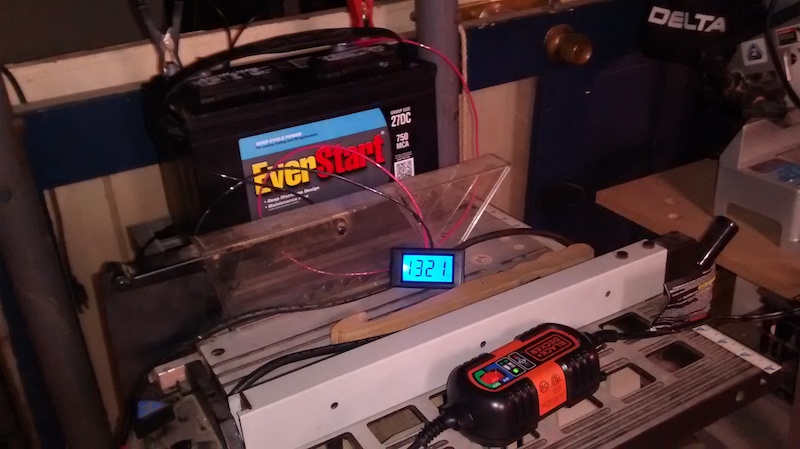 The reading is higher than it would be normally at rest  because the battery tender/trickle charger is hooked up in this photo.

One day, when I do solar and get better and bigger batteries, of course I'll get more complex monitoring, but for now, Juno is moving from the eighties straight into the nineties.  Can't move things along too fast or we'll both get culture shock!

This is all great information Rich!  Sometimes I find it's the basic information, especially on safety, that is overlooked. That bit about rubber gloves was especially interesting.  Another benefit of those rings, and why I am using them, is it is easier to tell positive and negative (I bought the red and black ones) if you are in the dark or in an emergency situation and I might not be paying close attention.  Anything to idiot proof things is a bonus in my book.

Hi Dawn,I want to say a few things here that may not pertain to your situation but may help you and certainly any one new to maintaining there Rigs D.I.Y. Style. First off, any number of things could have blew your test leads, from inadvertent wrong settings to faulty equipment so don't beat your self up. That being said May I suggest ..." A HABIT". When dealing with test equipment and really most equipment, get into the habit of returning- in this case a meter to off after every use. This forces you to set up the meter for the task at hand. I also follow this rule for Torque wrenches (set them to zero, or off for power tools, especially ones with a locking on button) and other instruments as well. It doesn't take a lot of time to do and can save you a lot. By doing this you will know what happened and won't spend a lot of time second guessing your self or, possibly recovering from burns caused by arch flash to the skin or eyes. Something else to mention; batteries out gas when ever they are on charge or under use for that matter. This gas is explosive and they can and have blown up to the detriment of the unlucky person in close proximity. You should remove the battery from the charger and allow it to rest a bit before testing. In most cases this will render gasses to be harmless. Always charge in a well vented space, Never put the charger above the batteries as the gas can be ignited by the charger ( primarily meant for open frame chargers) When charging a car battery in the car or RV, leave the hood up. Always wear P.P.E. Personal Protective Equipment. Safety glasses or more preferably a full shield and non rubber gloves at a minimum. Rubber melts when hot and can stick to skin. wearing leather over rubber will help eliminate or lesson the risk. Keep your batteries clean and vents free from gunk. Distilled water and baking soda is a good solution for cleaning batteries. Simply disconnect the battery from the load sprinkle the soda on the top of the battery and add a little water. Use a small paint brush or scrub brush and gently scour the surface and rinse with the distilled water and let air dry. Clean the terminals with sand paper or invest in a post cleaning tool. If possible install felt battery terminal rings to the battery post or spray with a spray on protect-ant. I know Iv'e mentioned some of this before but I hope this is of some use to you and others who read your post. It's always interesting material.

Thanks Russ!  I'm looking forward to getting it in the truck and my next project.

A couple of people have pointed out now that the trickle charger shouldn't have been the problem or my mistake.  I carefully double checked my settings on the multimeter after I burned the leads out - I had performed a successful test a few weeks earlier without the trickle charger on and had actually just left the settings as they were.  So still scratching my head as what I did wrong.  If I ever determine that I'll be sure to post it here for anyone interested!  However I don't want people who read this in the future to think that the trickle charger being hooked up to the battery while I tested the multimeter was the issue.

Very good, Dawn. Sounds like you have the whole project well in hand. Congratulations on your first practice install. The more you do things like this the more your confidence will grow.