Unfortunately I only had this afternoon to get out and work on Juno.  Earlier in the week, though I did learn all about topping up batteries and how to test with a multimeter (my house battery is subsequently in fine shape) –so that was something.

The Good, The Bad, and The Ugly

First, I finally figured out how to use the new environmentally-friendly piece of garbage that qualifies as a modern gas container so it doesn't leak gas out of the nozzle connection (rubber sealing ring was on the wrong side - didn't seem like it wanted to seat on the other side, but it solved my issues after switching where it was seated).

Also, looks like my new tire pressure gauge works - got one especially made for duallies with a push / pull configuration. I was wondering if I was going to have to make extenders a priority but I was happy with my ability to get my hands in where I needed and the room I had. I've heard people say that extenders can actually create problems so wasn't excited about going in that direction. The gauge has a little pressure relief valve that holds the reading until I let it go. Love that.

And, ensured that my Rugged Geek air compressor works off the little micro battery - it's noisy and took awhile to add five pounds of pressure in a low front tire, but I think it will add some peace of mind when we are camping being able to air up the tires before we hit the road if we found one is underinflated. If it's completely flat it's time for Roadside Assistance anyways. Except for two, the one mentioned-–and one I'll mention under the bad–they were spot on the 60 lbs that it says for them to be inflated to on the door panel.

As for the bad...went to check the inside left dually and ....pfft...nothing. Hmm? Did my gauge break already? No, works fine on the other one. Try another gauge. Pfft. Nothing. Hmmm. Broken valve stem, that's not good. If I can't check pressure, I can't add air, right? I have no clue...that's just what is running through my head. Better eyeball this. Hands and knees. Yep, this is bad. Gotta a bulge now - tire is about 50% low and it wasn't when she arrived. Sigh. Wow. Those lug nuts look really huge...

Then, she wouldn't start.  All my youtubing on how to properly start a carbureted engine and I get nothing. Won't catch when cranking.  Have I flooded her?  Or has the hard starting issue finally caught up with me? Well, she's nowhere a tow truck can get to her - looks like I'll be putting in that gate sooner rather than later.

Finally, the ugly - I decided what the heck, the sun's out - I'm going to tackle that weather stripping job on the camper door. The foam has deteriorated and I've got the stuff to replace it (at least with what is on it now - whether that's the right stuff to use is a question soon to be up for discussion). I figure this will be a quick and easy job.  Oh, no. The foam came off easily but the adhesive backing is white on rice. That's okay, this girl has her nitrile gloves now - mineral spirits are my friend. It was a brutal job. However, the results are worth it: 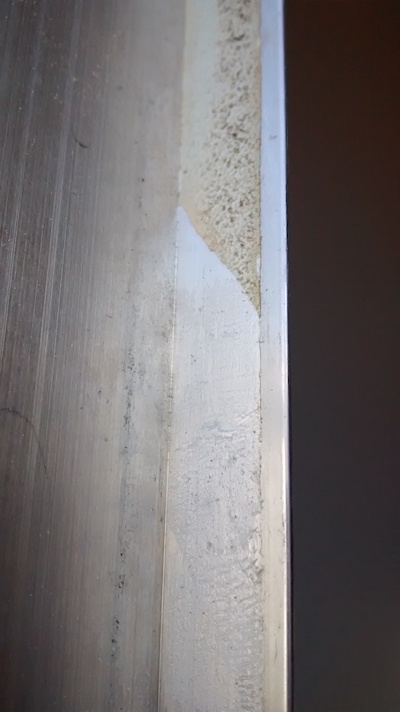 Before with foam off, showing tape and the adhesive below - in scraping breaks I would run the mineral spirit rag across the adhesive and that for the most part rubbed off after repeated passes.  The tape was a nightmare though - work to get the plastic scraper under a corner, push it up enough to get a finger hold, pull, have it rip after a quarter of an inch, spend another minute getting the tape piece off my glove and into the wastebasket. Beautiful however when all finished.  Got lucky as the top strip came off in one piece, just had to remove the underlying adhesive.  Worst was the bottom trim as my scraper didn't fit well in the seam or in the corners.

I've left putting the stripping back up - after all that work, want to ensure I have the right product!  What was there was 1/2 inch window insulation...

Sun is shining, back is aching, but I have a smile on my face getting that door cleaned up - decide to give Juno a crank just in case I'd flooded her. Yep, turned over the first crank (but she dies - expected - until I catch the throttle just right and can keep her rev'd for just a minute before back down).  Two cranks later she's up and running her normally cheery self and she and I just sat for twenty minutes listening to old tunes on the radio. Sigh. Wish I didn't have to work for a living, or someone would pay me to do this.

It's been a good day. And now I get to figure out how to change a dually!! Better here than on the side of the road, is my thought on that.

Thanks for the sympathy!  Good to know that a week or so probably won't hurt the good tire.

I feel your pain dawn. I don't think you will hurt the good tire if you leave it as is short term. I see a lot of C class RV's set up at camp sights using only the out board duel up on leveling blocks for a week at a time. I have had to do this myself on a couple of sites. I don't like to but some of the places I've  have a grossly different take in their discription  "it has a mild slope". LOL

All sounds good.  I know I need to deal with this sooner rather than later so I don't stress the good tire - but my back went out this weekend (probably in anticipation), and I'm gimping around like a 90 year old - really shouldn't have tackled that weatherstripping.  Actually, come to think about it I know 90 year olds that are more spry than I am at the moment.  The BF won't be back in for another week and a half.  I assume that's a little too long to wait.  Might have to make some phone calls and see if our handyman who "knows people" can help me out.

An other thing ( this might be unique to my camper), If I jack the rear duels up by the axle, I can't remove the tires because of the plastic wheel house trim. I have to jack the palace high enough to put stands under the frame and allow the axle to drop before I can remove the tire and rim from the axle hub. I carry a set of 7500 pound stands mainly because they are taller and less blocking is needed to achieve the clearance I need to get the wheels off. They came from Harbor freight or Tractor supply. I also carry a thirty ton hydraulic jack.

When I bought tires for the Palace the tire shop didn't clock one of my duels. I had to do it my self at home and my back was not happy. A tip for loosening lug nuts is to have a good four way wrench and a small jack stand along with a short piece of pipe. Put the wrench on the lug nut  and support the other end with the jack stand. You then put the pipe over the cross wrench and with the wrench supported with the jack stand you can put significant force on the wrench with the pipe;even standing on it if need be. you can adjust the stand as needed when going to the next lug. any way with this method you can save a lot of stress on your back.I just jacked the camper off the ground enough for the wheels to clear and pulled the out side tire just off the ends of the studs, spun it to get the inside stem to be clocked with the open spot of the outside tire. I then used the same method to re tighten the lug nuts and torqued them at 140 pound feet. I re checked the torque after I reached the camp ground. I think tire shops recommend torquing after fifty miles.

You must be psychic - I was just looking at their website :-)

Harbor Freight usually has good sales on their jack stands,,

Sounds good; you outline everything I'd started thinking about.  Boy, all this money I've spent already and haven't gotten to the FUN stuff :-)

I myself use 5 ton jack stands,,, They are advertised as Truck jack stands.. Don't worry, You DON"T NEED those  Semi truck jack stands, The purpose of the Jack stand is for SAFETY Reasons,, just in case the jack slips or drops. (Hydrolic jacks have a tendency to slowly lower themselves when you don't want them to). You place the jack stand Under the frame of the vehicle. Just be sure the Jack stand has a firm base to sit on,, If your on soft dirt,, then putting some wood under the legs will keep it from sinking into the ground.

Anytime your working Under a vehicle (trailers included), or even doing wheel bearings etc, It is best to use safety jack stands to support the load. NEVER EVER Trust a jack alone.

Yah, that's what I suspected.  Not a fun weekend out.  I have two "wheatie-sized" guys to help and I know how to buy beer (for the end of the day).

Okay, jack stands. I assume I need a pair either side of the wheel, on a frame bit to lower them onto after I initially use the hydraulic? I've put off getting them because I don't know what size I need?  My rig is rated for 10,001 - 14,000 lbs (I don't know why it's a range, but there you go). Currently she's empty, so whatever she rolled off the factory floor with plus a big hefty metal rearend toolbox. The tires are rated 3,200 apiece on each of the four on the back (certainly doesn't add up to 14,000 does it? Is the range dependent on the tires perhaps?

With this information, does it help you establish if I need 3, 6 or 12 ton jacks?