So, many RVers that are going to the two week RTR come to Ehrenberg first to meet, celebrate the holidays and anticipate the event.

I rolled in on Thanksgiving and was delighted to find a warm welcome and an amazing potluck.  Turkey, ham, yams, two types of stuffing, corn, mashed potatoes and gravy, the salad I brought, a two layer lemon cake, rolls and butter, cornbread, sweet potato pie, cherry pie, peach pie, whipped cream - and maraschino cherries soaked in everclear - being passed around.  And, almost all of the dinner had been cooked in Jim's collection of solar ovens.

There's a fluid group here - while less women than men (all solo except for one couple) the agreement is that over the last three years the numbers of women vs men are equal "out here".  Most of us are older - at 51 I'm almost the youngest.  The youngest is a Native American woman who is 38.  We seem to be a collection of hippies, retirees and those on disability.  Although it crosses all borders.  One woman is in a brand new Sprinter Coachman, and others are in vans older than my rig, their cars, and vintage trailers.

The desert is much more beautiful than I expected from YouTube videos.  Yes, there are rocks, "trap" spiders, tarantulas, ATVs, and coyotes.  But, there is also internet, plenty of sun for my solar, and a stray Irish Afghan Wolfhound that spooks the late hours (and the woman in the Coachman hopes to adopt), firepits, and hours of friendly company and conversation.  We seem to all be refugees from normal (or feel we are), but somehow together, we are normal.  There has been a like-mindedness and wishing for peace that has engendered a sense of community and safety that I find rare.

Curtis (who brought the cherries) was a technician for Chrysler for 30 years (aka Dodge) and he's suggested I try a 3-way fuel filter that returns the vapor back to the gas tank, putting the electric pump back in ... or as I've heard one time before, just be done with my problem and replace the carb with fuel injection.  Several of the guys have been working on my bike lock (I've lost the key and darn if I didn't hook it up to the ladder WELL) and while no success yet, I don't think I'll have to call a locksmith.  Other's have more pressing issues - generators and solar panels that aren't working or flat tires with stubborn lug nuts. 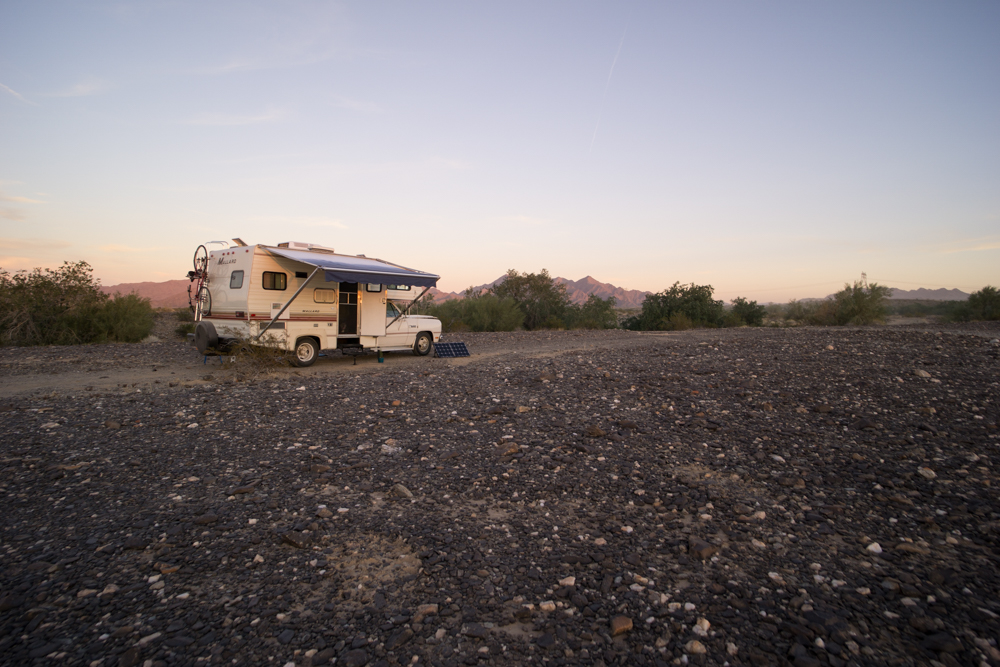 Hope everyone had as lovely a Thanksgiving as I did and more reports soon!

Hi Angie - restoring a vintage trailer is sure a challenge.  I can't imagine - I may have made Juno my own but she was in a solid state to start with.  And because of that an her age (84) I didn't feel required to keep it vintage pristine or true to her era (because let's admit it - staying true to the 80s really doesn't have much gong for it).  Must say I enjoyed the process I did have, though.  With everyone's help here it was an incredible learning experience.  The road has been harder for sure.  Flying without a safety net - but then, folks on the road are generally good.  Just watching the money drain out of the bank account was depressing :-)  Hope we meet when you get on the road!  But, definitely don't be jealous and enjoy where you are.  Many days I'd give my left arm to be home safe, with a bathtub and no DUST - grin.  Look forward to more photos!

Dawn Michelle- Great story ! Have been following you from Kansas as we inch our way along with the 69 Shasta Loflyte in such a sad state. We have faced major problems since day 2 but will continue to work many hours daily until the winter is too cold. We will then look into a double 55 gallon wood burner for our work barn.

I am amazed by your solo trips and glad to know more ladies are enjoying the adventures. And only a little jealous ! :-) Yes, kkep sending in the pictures and great descriptives ! Even we newbies can enjoy good stories!

Be safe ! Until we meet again----angieoakleaf

I have found some nice guys to help me figure out my additional solar - one has definitely tested it all (he has like 1100 watts of solar across his trailer and his truck - even runs an a/c). Of course mine will be simple but I feel fortunate they are also going to help get my new converter fully wired in (rather than piggy backed). I also need to rewire my electronics system when I have my new battery/system in. I wired it with too small gauge wire (dumb now that I think about it).

Comment by Frances DeHart on November 25, 2017 at 10:57pm
Definitely new challenges that's for sure I put a picture up of my roof but I have more I will definitely let you know some more!

Comment by Frances DeHart on November 25, 2017 at 10:24pm
Love this beautiful!! I should start writing more been in my camper since March and now going into the winter months either. It's going to be really interesting that's for sure!! Love reading about this!!