Good Morning happy campers, and not so happy. Well continuing the saga of the starting point, after having many trucks in my life time, I was in dire need of some transportation, previous truck wasn't getting the gas mileage I needed, and repairs were too costly, so I sold it. I stumbled on my current camper hauler, 1987 Dodge D250. I found it via craigslist, and after purchasing it for $1200, took it home and started cleaning it up, and found the original window sticker from the…

Since joining this Vintage Camper, I have been urged to start my own blog and fill folks in on what the heck I'm doing in sunny south Florida with my Honor Built 8' slide in camper.

Hello my name is David, I live in my Honor Built "Aztec" camper, which I found on Craigslist last summer 2014, in Chilecothe, OH, that had been stored for almost 40 years in a well built barn. When I answered the ad for the camper, $500 asking price, I fell in love with it at first sight. All the cushions…

I am currently working on a 69 Nomad. I took the hubs off and am booking into why the brakes where on working. I found the brake shoes, bearings and tires online.
Yesterday I connected the power for the first time and everything worked but the air conditioner.
I am also having to revisit the Oven and furnace since my light stick ran out of fluid.
On of the biggest contributions is a book I found at the used book store by Bob Livingston, second edition.
I am trying to do…

Since before Xmas holidays, I have logged 3,000 plus miles between Waco Tx and Corpus Christi Tx. (Padre Island). Having to look after my Folks property that my brother owns and I watch it while he ventures out and about, (usually in Michigan).To off-set the cost of travel expenses, I have hot shot'ed some B/P and 5th wheels both ways. I christianed  bubba jr. (Red 97 dodge 1500…

Pat asked for my web site for metal art that I do. So I will add below. although I am not happy with this provider, and will be looking for a new one. So the web site will be changing when I get to it one of these days.
thanks
larry
http://lucecustomcreations.weebly.com/

I began to write this blog so I can share my experience of rebuilding my Vintage 60's Yellowstone Camper. My plan is to post videos and pictures of my progress.

One day as I was peacefully ejoying my quiet retired life, my son came home and decided we needed to clean out the garage! We ended up with a large pile of scrap we didn’t know what to do with. Chris got creative and started welding pieces together creating beautiful art. That looked pretty interesting… 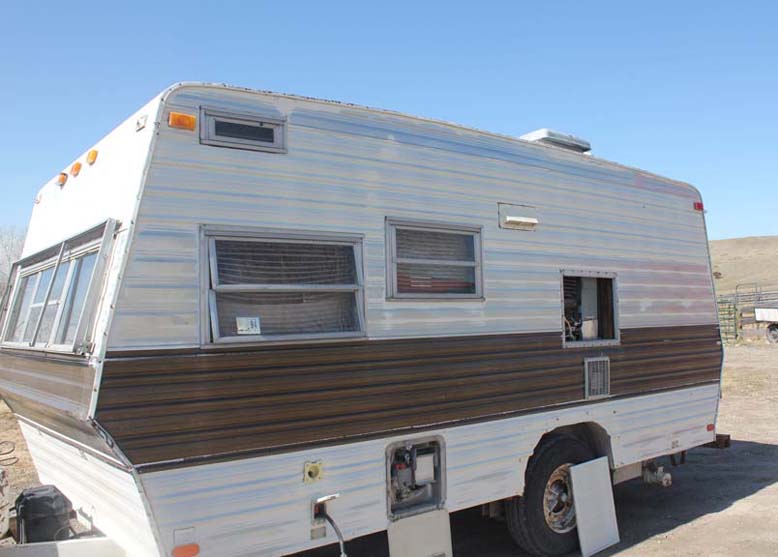 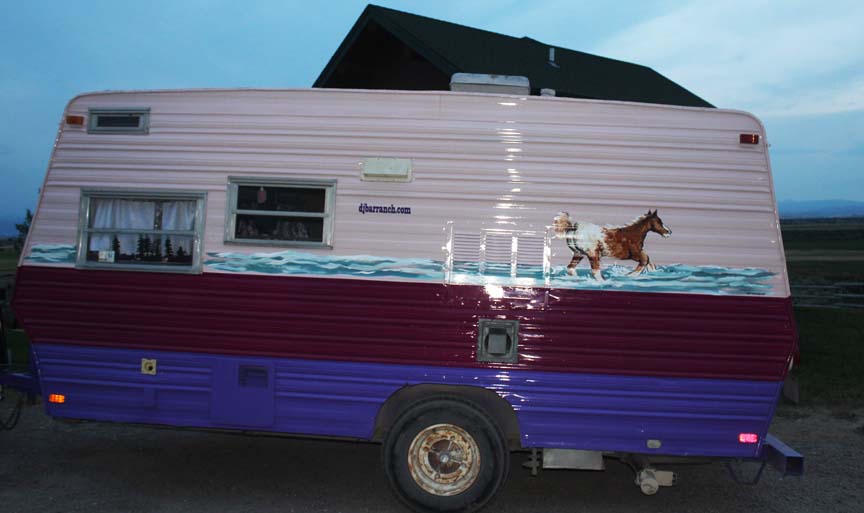 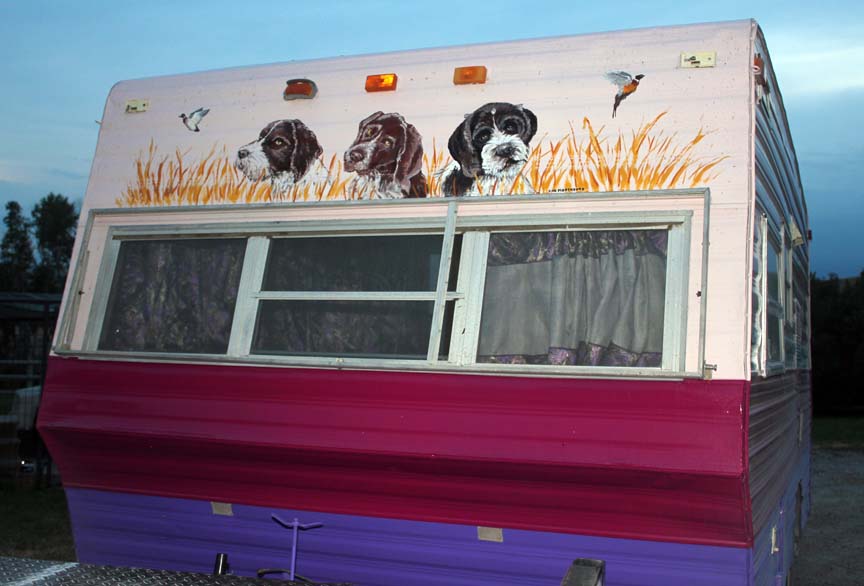 getting ready for Route 66 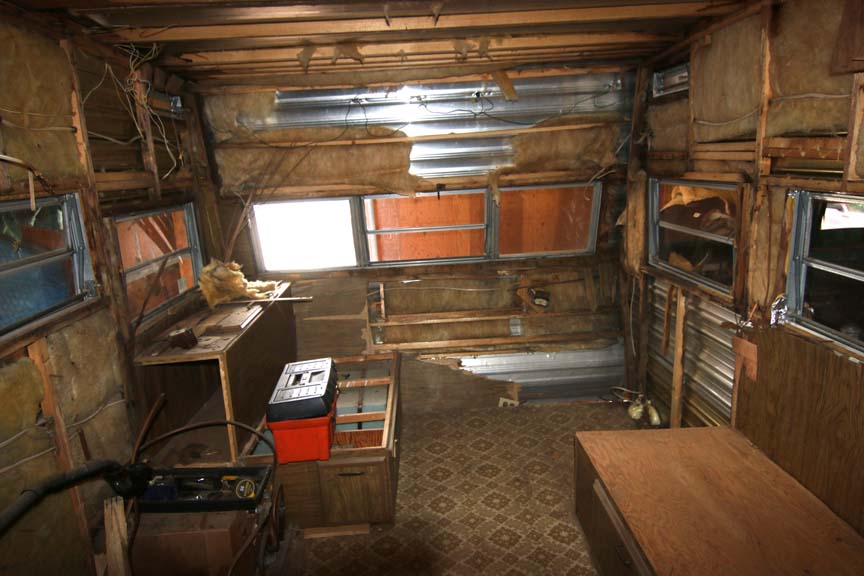 We just came in from a day of work on the H.H. Our floor was shot so taking it out was more a matter of sweeping up rot, pulling nails, sweeping rat crap, and figuring out how the thing was put together. Unlike other trailers we have worked on where the entire floor is built and finished, and the walls built on top of that floor the HH is different. The floor is independent of the walls. The whole system is different. Directly on top of the angle iron and channel iron frame is a flat…

This summer I restored this for a dear friend who is also a member. Not much on computers but I'll post some progress pics

Thought i had all the leaks fixed in this old beast.. Well it leaked again.. guess i need to seal it with some type of roof sealer.. anyone have some suggestions

I did find the mfg for this trailer..I's Gold Star out of FT. Collins..

Pat has suggested that we talk about what we are doing with our older motor home Recreational Vehicle, and how that work is progressing.  I think that a 28 year old motor home RV qualifies for the term "classic" or perhaps "vintage,"  so it should meet the definition for "older," so it might fit in here.

I had not really intended to get a motor home RV back in the summer of 2013.  It just sort of happened.  It had belonged to a…

I currently have two die hard deep cycle rv/marine batteries each of which is 565 cca (how many amp hours is that?). I have two 270 watt industrial grade solar panels I will eventually mount to the top of the rv. I have a cheap charge controller that says to only hook up one panel to it. I Spent a week in Datil, NM with only one panel pointing south and up. With a 500w inverter I was able to run my omega 8008 juicer, laptop, and a few other low voltage charges on iPads, cameras, etc. and keep a… Continue

Very slowly I am removing parts that had issues and replacing what I'm able. The biggest issue right now is the dry rot from the stove condensation leaking down the backsplash. Next are the windows after I replace the water lines with pex and put the port side back together. You can follow my progress on YouTube...…

I was waiting for it to warm a bit before we went out to work on the Holiday House and I saw this invitation to start a blog. At 62, computers in general, and "new media" in particular are as foreign to me as a foreign language. I have never blogged, or journaled and anything that took time or effort on the computer. As a general contractor by trade, I feel much more comfortable doing the work than talking about it. But what the heck, why not give it a try?

The story of the Holiday…

My remote start for genarator don't work any ideas

Traveling and Living in an Old Class A RV

We are 2 Southern Women who have been traveling in an old Class A RV for over 2 years now. We started out just trying to visit every single Florida State Park with RV camping. But as with anything else in life that requires quite a bit of money to keep doing. So about six months into our adventure we decided to become volunteer workampers in the Florida State Parks to help pay for our site fees. We make and sell handcrafted items, I have written a book (Insiders Guide to Campground Hosting…