my renovation of classic 73 winnebago brave

"I should have been posting about this all along, but I was having to much fun working on her. I guess you have to go to my page to see the photos."

my renovation of classic 73 winnebago brave

I don't know where this blog post is going. I would love to take some questions about her. Let me know what you think.

Vintage 1962 Serro Scotty - Restored and ready for a new home!

Here is a link to the Restored Vintage Scotty I have for sale and her journey to finding her old glory! I hope you enjoy following along!

Advice on a roof top ac

Just wanting to get some advice from some about putting in a roof top ac on my 64 Aristocrat Lo Liner.   At one time I used a small window unit through the side window which was small (4 or 5k btu ) and it worked very well . But I really did not like having it in the window.  Can anyone tell me what is the going price or a fair price to pay for a small roof top? I have no problem with wiring it in or evan fixing one that made need repair…

Where can I get "Frolic" embols? We have a 1967 Frolic camper and need embols for the outside

After months of research...I finally discovered the origin of my coach. Apparently, Irv Perch sold the Arisotcrat company to Boise Cascade in 1969. He then went on to build the American Clipper line and Boise Cascade began marketing these Class C Motorhomes. What I don't know is if these early designs were ones that Boise got from Irv Perch with the acquisition...or were they unique Boise designs? I've now discovered several of these coaches on Ford Econoline chassis and I think some were…

Replaced the original hot water heater with a brand new one and rebuilt the original avocado green toilet. What a learning experience that was! Still repairing leaks in the plumbing. Down to my last four minor leaks. Should be good to go by the spring of 2013. Then we can take this lovely crate on the road!

Well finally got up on the roof and removed the carryalls,the latches were rusted tight it had been so long since they had been used! Looks much cleaner without them. Also got a heavy rain today and roof leaks reared their ugly heads,Dadgum!

Sam thanks for the reply and answer your question it is a white pipe.I won`t let her put any drain cleaner down it so we are working on whether to remove toilet and get close and personal .Sticking my face down the pipe is something we all look forward to LOL!!!!

My wife is on a mission and anyone that could help it would be most appreciated.Her problem is that the pipe from toilet to holding tank is black and she cant clean it . She has tried different types of cleaners and soft scrubs.She has tried brushes and hoses with attachments.This is becoming an obession with this and We are going to wait patiently for any and all responses.

Well finally gave up on rear air unit and had it replaced,Paid tatum camper sales $819.00 with tax for unit and labor.Don't guess the got me too bad,Now the have a used 15,000 unit for $200.00 with a 30 day warranty so that will be going up front soon.So the story continues!

Be a part of this blog is amazing as to explore new and latest ideas about the travel trailer and caravans or campers which are beneficial for traveling as well as business, but to improve RV quality as of everyone's great concern regarding this fact some tips according to Big Trailer Warehouse camper trailers victoria use nature friendly technology.

1. With change of technology…

When I was small I remembered my days to travel using bus and trains which are very hectic and many problems like not any freedom to look this beautiful nature and what a small child wants.

Now I am grown up and purchase a caravan from Big Trailer Warehouse which help lot me not only in travel, but in business also concerning to it maintenance will take, but it provides a secure life instead of traveling… I love the smell of caulk in the morning ! 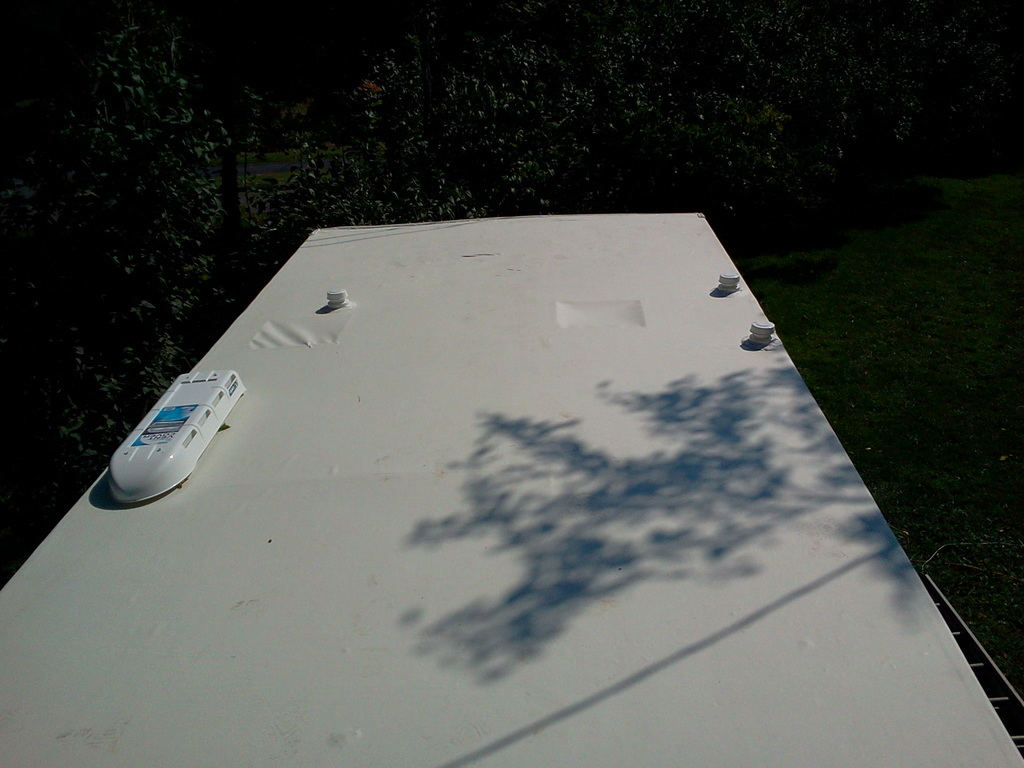 the rubber is on, a few wrinkles here and there that i can live with. you can see the outlines of the two vent openings from the bathroom and the shower stall. i ran out of money and time to replace them so I'm blocking up the voids with plywood panels and putting the vents in next… 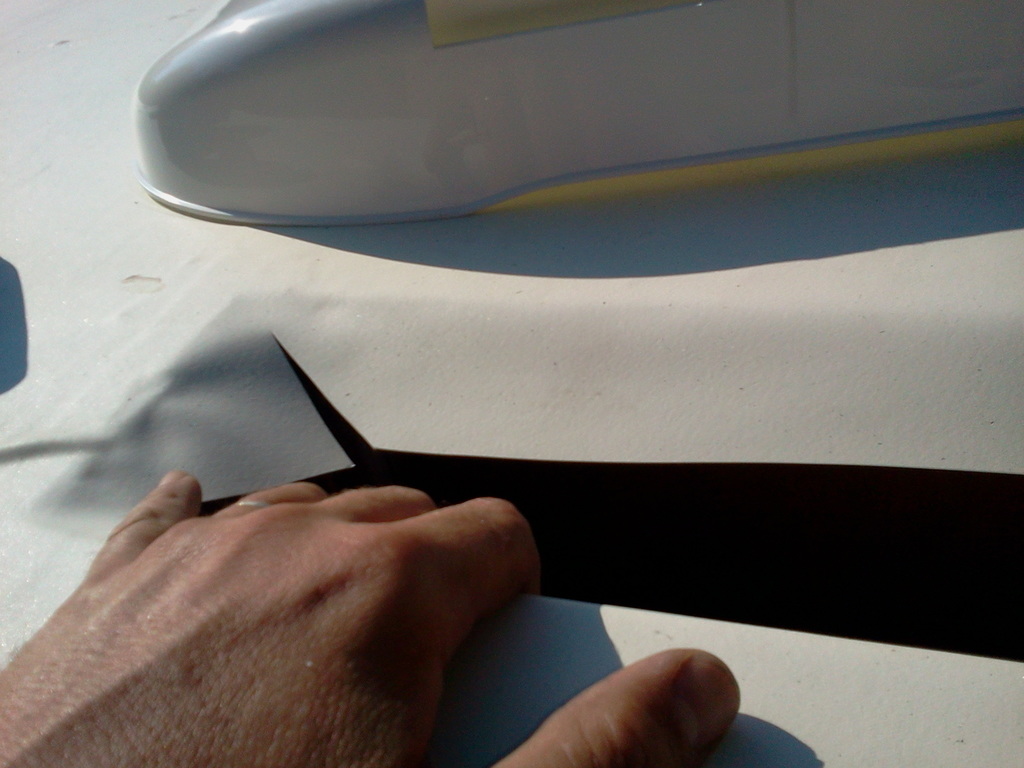 taking a razor knife to a perfectly good roof is hard to do! but I want my fridge so slice away. Placeholder for the "next" project 8)  Just for giggles I posted on Craigslist, the only thing it said is I Buy Vintage Trailers. Low and behold a couple weeks later a very nice gentleman called and told me about this project he'll never have the time for. After talking we both find out how much in common we have and he told… I tried to drop the position of the drip rails as low as I could so if and when I reside, there is some wiggle room to remove and re-seat the rails. If we reside, I am seriously considering plywood with a marine grade epoxy based kind of paint rather than aluminum or…

Thats a lot of putty tape! 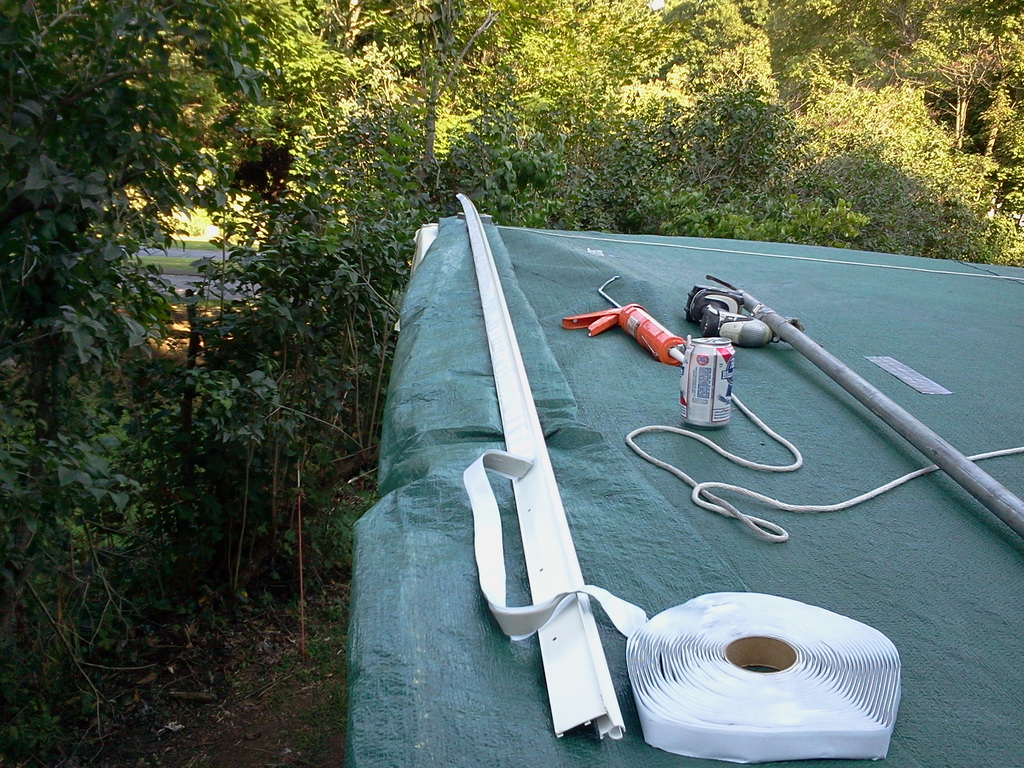 I would not do this again without setting up some help for the other end of the 20' rail. I used duct tape to hold it all in relative position till I could get a couple screws into it.

Just enough daylight left to make a run at the roof today. 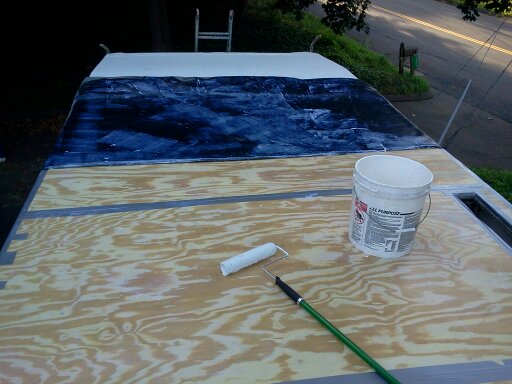 It rained all morning, but when I got home from work, it had been sunny for several hours so I peeled back the tarp and had at it.