My wife has been on me to find a camper that we can fix up together.  We know absolutely nothing about camping, but we're both pretty handy and with two small kids it seems like a hobby the whole family can enjoy.  That being said, it's hard to find much time to work on major projects so I hope I have found something that we can work on realistically.  The chassis has some rust as you can see, but I think that's mostly from the salt air in and around Myrtle Beach.  The frame seems to be…

Dehumidifier to the rescue! Thank you Ken for reminding me I own one. LOL

I headed down to the basement and brought up my Maytag dehumidifier. This is a 45 pint unit. I usually empty it once a day in the basement during spring and humid weather, but I'll bet it will need emptying at least a few times per day with this camper right now.

This unit has an option to drain the water away via a hose, so I'm going to see about doing that tomorrow morning when I take it out there. Then I don't have to worry about it shutting down as "full" while I'm at…

No sleep did me well....the wee hours of the morning provided a solution to fixing the counter top...

Yepper...I found a fix!  But first, let me tell you what was probably the issue to begin with once that particle board got soaked under the laminate.

The stove.  Besides the 1/4" or so lip of the frame of the stove resting on the counter top edge, there were only two screws holding it in place. Those two screws were in the back of the stove into the counter.  The rest of the screws that were placed in there when installed, either missed the particle board all together or hit…

....I was sitting down taking a break from pulling staples up from the floor and got to looking at the counter top and stove. The stove had always looked lopsided, it's actually level in the front, it's the counter frame on the bottom that has pushed out of kilter.
Then I saw some particle board pieces on the carpet at one end of the counter, that had been cleaned yesterday before trying to rip up the carpet piece. Hmmmm....

Let's inspect. This is the back end of the counter top…

Anyone here camped much on the Texas Gulf Coast between Corpus Christi and Galveston?? I'm asking because I may try some free boondocking along the beach starting at Magnolia Bay (Port Lavaca)  working North in early December. Will it always be windy and maybe cooler ???

Hi all, I am a newbee. I found this website while searching for general repairs and rebuilds of mid 80's class C's. I don't have mine yet but will in a couple weeks. My neighbor has an old searay boat with an inboard motor that he wants me to fix. For fixing it he is going to give me his 1983? ( I think) rockwood Ina ford chassis. I will be taking lots of pictures to document the rebuild for my purposes and will share them here if everyone would like to see them. Anyway I plan on picking your… Continue

Before I started on the project today I wanted to visualize something a bit nicer to look at. I went out to the pond and saw the Rhododendrons in the morning sunlight. I thought I would share the beauty: 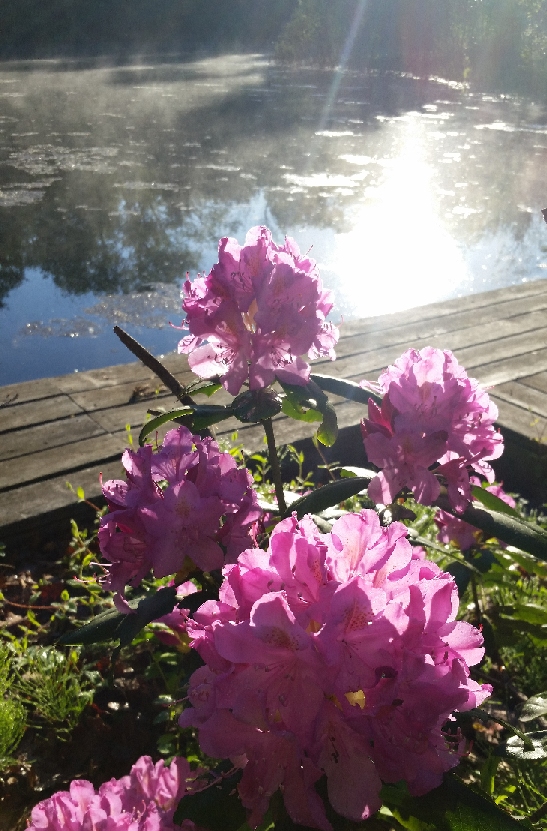 On with the work. Today I planned to take the rest of the cabinets down and then begin the kitchen end. The cabinets were a tough job, most of the screws were…

I need to find a window sash for my Rollohome.for some reason one was missing. It's for a 1948 Rollohome. It measures 17.75x 31.75 and has radius corners.

Day 3 of Demolition....thank you for half azzed jobs..... and I got lucky with the floor

There comes a time when you have to be grateful to those who do a half azzed job on things.  Ripping the carpeting up was easy peasy because it really wasn't put down with any real effort. LOL

I got lucky on the floor, I was pretty worried on that when I dove in, but it appears to be very thick plywood there (1" maybe?) and it's dry for the most part!  The edges are stained and wet, but they are solid.  I have the fan blowing on the base now.…

Well we have made progress. We finally finished the painting of everything and I'm liking the color. It changes a lot according to the light. Paul did the water test and discovered only one small leak under the kitchen sink where they had removed an inline filter and used a compression fitting. He bought Pecora to replace. The new plastic sink arrived and it weighs all of maybe five pounds. But it sure is s pretty parchment color. We had bought a kitchen faucet stMenards at s tremendous… Continue

I spent almost two hours on this project today just trying to remove the frame for the couch/storage.

One of my biggest pet peeves is trying to undo what someone else has done with screws and nails and glue.

People just seem to grab a drawer or box of miscellaneous screws and nails and just put them in as they go, disregarding screw head types, length, type of nails, and then to top it off they sink the stuff into the wood where it's too hard to get a drill bit in and seated…

One Down, Two To Go.

I finally got a hold of one side tool box and got it installed on my pickup. Had several lined up but by the time I got to them someone else had snatched them up. One of the drawbacks to living in a sparsely populated area, it takes time to drive to where these items are located.

Anyway here are pictures of the first successful install.… Day 2 Demolition - The Good, The Bad, and The Truly Ugly

Well, the Good is I actually found some dryer board toward the back as I move on with tearing down ceiling. YEY!  And I got the hand crank off for the antenna without having to cut it.

The bad is, this is going to be a complete gutting.  Everything must go. And hopefully I won't have any more ceiling falling on top of me. Stinky, wet and nasty stuff up in 'der.  LOL

I really am enjoying the demolition part. LOL

That front overhang is bad....bad...bad to the blackened wood.  I've ripped out a bunch and have an oscillating fan going in there to get things dried up.  The rotted wood is all pretty wet. 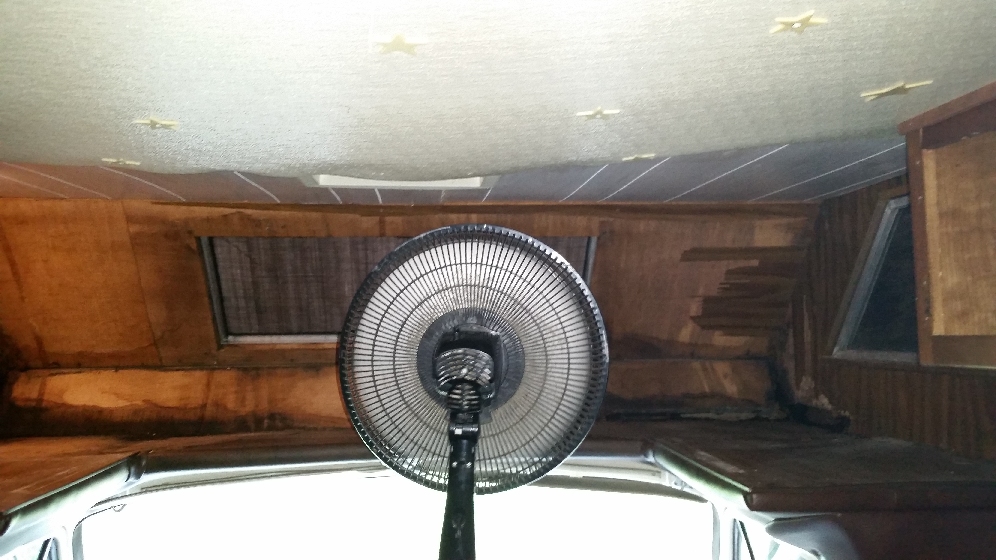 This is what I started out with on the right side:…

Day 2 of inside tear down

The gutting is going pretty well.  I am using the camera phone to take pictures of wire locations and connections as I pull out the lights and get the wire out of the way.  That way I don't have to guess on what wire went where. LOL

Found a couple of wires that had been stapled right through the actual wire.....I will be fixing that. ;-)

The bathroom shower floor is a fiberglass molded unit, and there is a large crack right down the width of the floor.  Not sure what…

She's home and ready for surgery with long term follow up therapy :)

I have already started the gutting process.  As I stated in a comment earlier, it's not worse than I expected, it's as bad as I expected.  LOL

The water damage is all on one side, but not so bad that it can't be fixed.  I was relieved to see that.

The window on the front overhead will need to be completely resealed.  The metal frame fell off when I removed the cushions.

I'll have more pics later in the week, daylight was dwindling fast here.  The awning will need…

While I have time this morning (It's rainy and cold here in Michigan again), I wanted to post a giggle pic and hope to get some smiles.

My Dad has restored several campers/trailers in the last few years, and his first one was so cute that I had to replicate it for him after he sold it. He was so proud of it, and I wanted it to live long on memories.

Okay, I'll post some pics and info of what I am dealing with from the start on this. This will be a long term project that I will complete as time allows from work and such.

The engine is solid, and the tires are almost new. When I close the doors on the cab it is solid, I like that sound. ;-)

I don't see any leaks around the windows, but they will need some resealing for sure.

Here are two views of the outside, I won't have a pic of the top until the RV gets here. I'm…