Here is how I keep my pipes from freezing.
I call it an "Active Antifreeze System".
The idea is to detect when the pipes are getting cold and then run hot water through them to warm them up. So you don't loose any water in the process you create a loop in the hot/cold pipes.
You need a thermostat and an electric valve to make a loop out of the plumbing. You start at the far end of the hot water pipe, through the valve,…
Continue

Anyone have any information on a 1976 Giles camper trailer ?

I have aquired a 1976 Giles camper trailer . Anyone have any information on this camper ? I know that it is an orphan .Thanks in advance for any help.

Who can tell me anything about a 1969 avalon

Who can tell me anything about a 1969 avalon

Well we have been trying about everything imaginable to relaminate a ceiling structure in a Itasca Windcruiser and finally my husband got something to work. He drilled holes in the roof and used a turkey syringe to push fiberglass resin into the roof between the luan and the fiberglass roof, and it worked , but he thinks epoxy would work better.

WHY THE REBUILD WAS PUT ON HOLD ! All work halted on the camper to prep for our sons wedding. First, the patio. 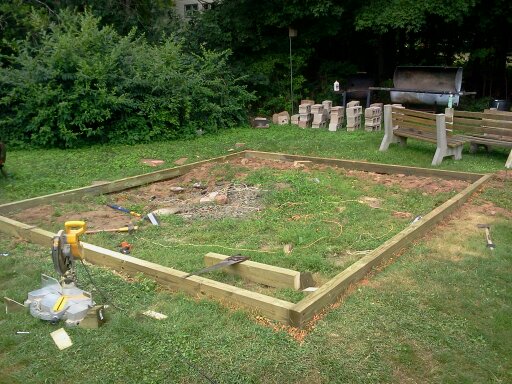 Not going to post all the pics, this still is a site about RVs after all !…

just about complete with a new teardrop trailer for a motorcycle ...room for two to sleep and watch the flat screen d

We just bought our first RV, a 1988 Minnie Winnie, "Minnie Blue" and although she needs work we already love her. TJ and I have been dreaming of owning an RV since we married and hope to be able to travel once we retire (and it's not as far away as it use to be).I'm sure we will use all the tips we find as we dig this hole deeper. I've enjoyed reading your blogs. Keep up the great…

Got the pics to the computer finally, so here is the last work till next year,, 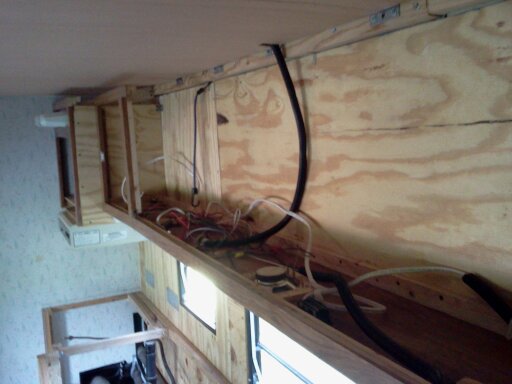 microwave and rest of uppers set in place. Wires re-run for speakers, lights and plugs. Face frames for the cabinate doors set, and false bottoms in to hide wires.…

I restore and make reproduction travel trailer emblems. If you have questions or want to know what I have drop me an email at rexconaway@gmail.com. I do not look at this website much but i would like to hear from you. If you have broken plastic emblems I can repair or reproduce them.

One method to Winterize an RV HOW I WINTERIZE MY RV

There are different ways to winterize an RV, some of which may require less anti freeze then the four gallons I generally use, but FWIW here’s my method which I have used for well over thirty years. First of all, I highly recommend a water heater by pass plumbing job which isn’t that hard or…

I have a 1978 Itasca Winnebago, 24 foot length. Found out today that the inside lights do not work, 12 volt powered lights in the back. They used to work. Have done nothing with it this summer.Lights used to work. Checked the fuse box under dash by steering wheel. Fuses there are good.Headlights,wiper,horn, dash radio work. Battery good, wires to battery good. Generator in rear does not start. Separate problem.Water pump in back also does not work, used to work. Any help appreciated. No…

PHASE 2 OF CLASSC REBUILD DONE FOR THIS YEAR.

Forgot to upload pics from camera, Oh well. Our youngest decided to get married this year so all work halted on camper so I could build  patio and fireplace for the ceremony and a ten foot rib pit for the BBQ. All time and resources went into the wedding and party so the camper got cobbled back together enough to take on a mini vacation up to New Hampshire for a few days after the wedding and we called it a day! Winterizing to begin and we'll start all over next year finishing up the Cabinet…

A new Roof moves us forward...

We have been busy with a Colorado motorcycle trip and new kayak purchase...

We decided the entire camper would be gutted.

The roof was full of holes so we tore that off too.

The back quarter of the floor was torn out and rebuilt. We rebuilt the rear and side walls as needed.

Some County Fairgrounds rent out their enclosed buildings for winter RV storage.  Several East of the Cascades in my area are the Spokane County Fairgrounds,  the Fairgrounds near Cusick, WA and in Deer Park, WA.  Also, the former old Costco building on Sprague Avenue in Spokane rents parking spaces.  Some rent by the foot for around $12/foot for a one time charge for the months of Oct. 1 thru March 25th.  You can take your rig out and put it back in during the rental period, however, they…

Have been biting at the bit to get online but at the Caldwell ID RV  Park if you aren't within spitting distance of the office, you won't pick it up!

It's been over a month since I blogged Part 2. I think the last month has been the worst so far. My camera got stolen so there went all the pics I had taken. Didn't even care about the camera, just wanted the photos. Then came the rain and more rain...then the leaks started and the ceiling above the bed came down. I must have spent over…

Hi everyone.  I was having trouble with my generator on the old rv I bought. The engine ran fine but no current comming from the generator. After checking wiring, breakes etc.  I almost was going to tear it down to see if  something inside was shot. Something I have not done before and really was putting it off.  Then I was looking at Utube and saw a trick to re energize one.  Start the generator, Get a electric drill…

In 2011, after my daughter was born, my fiance and I started taking about downsizing, severely. After my job dried up, we left for greener pastures, found a small stick and brick and moved in. The job I had taken didn't pan out, so once again the idea of downsizing came to visit, and stayed.

We set literally everything we owned in the front yard and went to selling. For three months this was our only income, we saw our treasured items, which we held onto for years…