The madness started in March 2013. I was asked by Christine, my wife to search the internet for a grade 5 Alto Saxophone book for one of our twin boys. Quite a simple task for a woman but a guy with the entire internet at his fingertips, I don't think so!!!

Been looking for a set because mine are original, from 1976. They have yet to tear, but would like to find a pair and replace them before too long. The folks at NAPA looked at me like I was asking them about getting my hands on weapons-grade uranium...CARQUEST, O'Reilly's? Surely you jest?

Also looking for a set of 19.5 Alcoa's in the 5-lug, 8" spread (Budd Wheel)- might see a unicorn living in my younger daughter's bedroom before that happens, LOL, just thought I'd throw it…

Trailer life in my backyard

I am so glad I live in California this winter. We may have experienced extremely unusual cold temps, but at least they haven't dipped into the minus numbers. I got pretty cold in this trailer at night, but it was manageable.

I also fund a small blessing in not having been able to figure out how to hook this trailer up to a water hose. One night I forgot to cover my garden faucet and the manifold and garden hose froze. The manifold split. I am sure I would have experienced the same…

We finally too'k the step!! We now own an 85 Allergo. She is all original. We have had our share of water leaks, electrical problems and worst of all. trying to get rid of things we don't need from the house. I think this is the hardest part due to the things we have had for so many years and now we have no room for it.

We spent our first night last night. It truly different than living in the house. We are very happy though. We are now part of the RV community.

Just bought 68 Aristocrat LoLiner, will be needing some help of restoration ideas, getting excited. 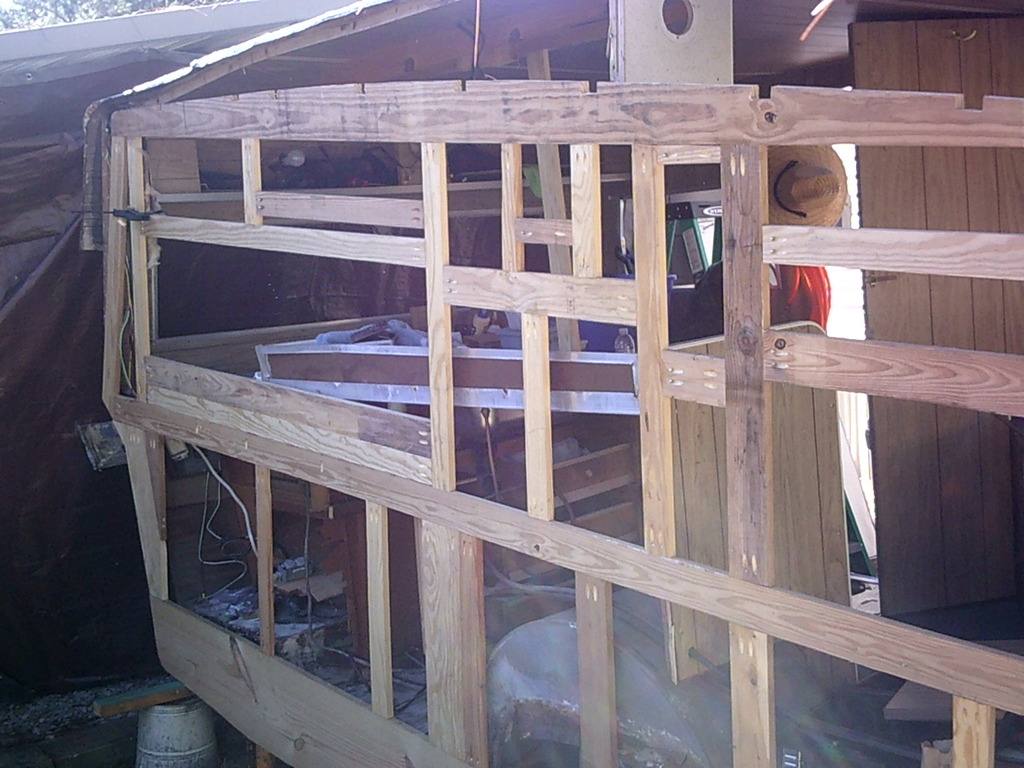 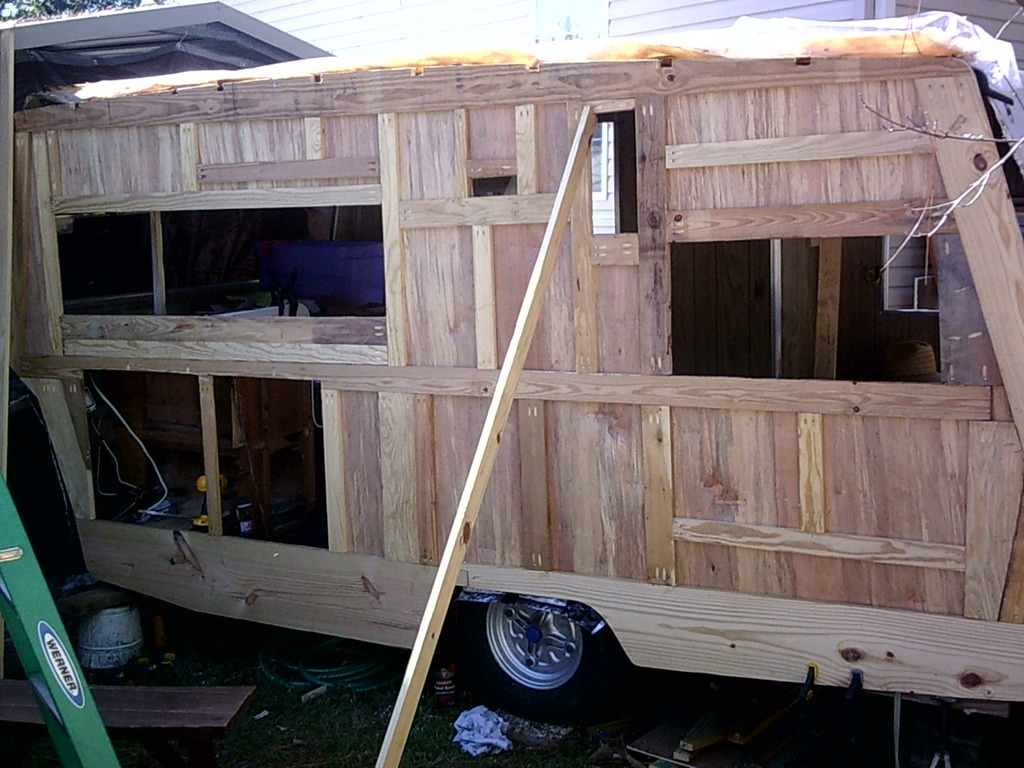 Its been a learning process to say the least. Complete rebuild from the frame up.

we are foolish and invited 4 grand kids to tag along, but their great kids and we feel will benefit from the experience and none of them been much out of state yet so be a great experience for them,since i enjoy getting out little more then wife, will be nice to have someone to talk too when i get lost , and them being smaller, the buzzards will go for them first,lol

supplier Parts Geek has hard to find dodge M300 Parts, which I could not find until now---hope they can help you, Rick.

I make reproduction trailer emblems. What I do is take an original emblem and use it to make a mold. I have quite a collection so far,but I'm looking for several brands that I have requests for of emblems I do not have. If you are willing to loan me one of these emblems to make a mold with it would be very helpful to others. Contact rexconaway@gmail.com. Here is the list of emblems I'm looking for
Metzendorf-Rainbow-Terry-Deville-Silver Streak-Comet-Aljo.

I never posted about the end of our vacation in September because I was too fed up with our camper. The last day as we were driving home from New Hampshire about 150 miles from home the front end began to drag to one side and I could smell the unmistakable aroma of brake pads being fried. When I put the brakes on to grab a quick exit ramp nothing happened! They had overheated and glazed over.…

Hi All.
Total newcomer here. But have big plans and dreams... Restoring a 16' yellowstone cab over. Luckily it was in very good condition when I bought it. Purchased on eBay in Montana. But it is in New Orleans now and I definitely need to be able to lock my hitch. However it has no pre drilled holes.
I am guessing that some of you guys have this figured out , please share.
Thanks, liz

Well, hope all is well with all. Rosie left yesterday as the insurance company took her to auction. Got diddly for her, so sad. What do you do? *SIGH* Here we are.... it is already January and in only 4 short months we are planning on being on the road full time as first time RVers. Every free time that I have is spent online researching and learning about this lifestyle, the ups and downs and the many challenges we will face.…

We are going to remove the jack knife couch (very uncomfortable) and replace it with a sewing table that had two flip up table tops. It will be used as a TV stand, sewing table and laptop stand. The couch is out (very easy, 10 wood screws) and soon as I am done with the sewing table, I will posts more.  April is making insulated curtains for the windshield. New covers for the chairs are coming soon. …

off the grid in a rv

We plan on going to somerset ky this coming spring and will be starting our homestead with just land only! Currently we have the 76, the 72 winnies , as of now we are fulltiming at a trailer, rv park in huber heights oh. . Our goal come spring is taking the toaster down to the 49er truck stop it is also a campground woo hoo and work on the land! We don't know yet if we are going to sell os take with us the oven ( 72 winnie ) it needs lots of work or sell it anyhow we plan on building a pla e to… Continue

Does anyone have a Hanson Love Bug emblem they would be willing to loan me so i can make a mold and reproduce new ones? email me please at

I need help finding replacement rims. I would like to find aluminum to replace bud rims 6x 7.50 6 lug  7.25 hole  offset they are mounted on a 1964 Travco 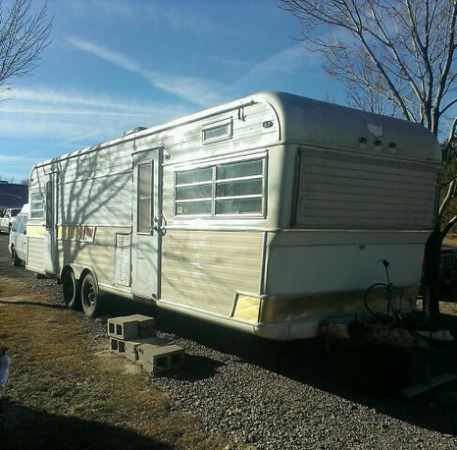 We have been on our old HR  for 2 weeks now. It is amazing how much "stuff " we have gotten rid of , yet still more to go.  Every day I throw out at least 2-3 things large or small. We had 2 months  to disperse belongings and used that well or so we thought. Send things to the kids,  donating to the local Youth Ranch and sharing with neighbors.  We still have…