Talked to the Original Owner of my '84 Today

Or more accurately the son of the original owner.

A week or so ago I was bored and decided to call a phone number on a Midas receipt I found in my '84 Allegro. It was the number of the owner at the time, but since it had sat so long I was pretty sure the number wasn't good anymore. But an answering machine picked up, with no custom message - just a robot voice saying to leave a message. I did. I didn't hear back from anyone until today when the son of the original owner… Of course, just when I really really need it...the riding lawn mower goes on the fritz again. It's old....like me.  LOL  After hours…

So, I ordered two vents…

....turns out to be the least damaged area of all.

I finally decided to tackle the main cab over window by removing the leftover paneling wood, having avoided it all this time because I just knew I was going to find major damage to the frame.  Well.....it looks just fine!  There is no damage around that window except for one little area in the lower right corner that falls into place with the right corner of the cab over that suffered water damage..  I can clean that up with…

Well, started the backsplash. Started is the key word there. Ran out of tile. I'm s dummy. Can't even figure that right. Had to order more. Not on sale anymore of course now that I bought the first b…

Well, started the backsplash. Started is the key word there. Ran out of tile. I'm s dummy. Can't even figure that right. Had to order more. Not on sale anymore of course now that I bought the first batch. Now it's "popular". Then I did something good. I used butcher paper for s template to cut carpet for the stairs. I did it perfect! What the heck. Something didn't screw up. I'm grateful. Meanwhile Paul changed out all of those fixtures on the outside of the trailer with shiny new white ones… Continue She used the old cushions as a template, and we salvaged the vinyl backings and the zippers.  That's five inches of high density foam.  Not cheap, but they cut, wrapped and glued the batting on for us.  It sits well…

Shoddy Construction and a little play on find Waldo....

Well, I can't blame the previous owners of Diggity Dodge for this one.  It was clearly constructed this way.

The corner with the gaping hole of light in the cab over behind the passenger door was a bit more involved than I had thought.  Originally I thought there was just a rust hole started there.  Nah....that would be much too simple.

Here's the outside of that hole, and the reason for it.  Notice the joining of the corner...the metal track wasn't a flush match over…

Not Dead in a Ditch - Take Two - Part I - Mechanical Update

Apparently my previous post was lost when I did a couple of edits, so going to try again and split it into two parts.  If you think you've read it before, then you probably did! LOL!

Just wanted to give an update as it's been a little while and while progress is slow, it has been happening.

Most importantly Juno finally went to the mechanics!!  WOOT WOOT.

Sooo....I was told during a conversation yesterday with someone offline that a simple haphazardly installed bracket for a CB antenna could not possibly have caused so much devastation and damage to the cab over.  I giggled....really....I did.

Of course, this prompted an official investigation for proof of the matter, including eye witnesses and photographs of the scene.

Can I get a witness??

The investigation provided enough evidence that the accused (the bracket) was…

Life got in the way

I was chatting briefly with Tina last night and was asked about pictures of the Travelcraft I call the Palace and I was reminded that I had none posted. A good while back I had the idea of revamping my picture file. It seamed like every one was updating their profiles and I jumped on the band wagon and got as far as deleting old pictures and changing my profile picture . Well as life often does, I was thrown a few curve balls from poor health to the loss of my very best friend of ten years…

Never never land...Never EVER count on a job being fairly easy in these things.......

I THOUGHT....yeah..this is what I get for thinking...
that this was going to be a fairly easy job to do on this heater duct that is crushed by the frame of the couch/bed. Now, looking over this couch and how it is bolted together with no working room anywhere to dismantle it and then get it back together, I decided that was not happening. (I am reminded of Lakota's comment on ablog about an RV being built around a cabinet. I think this RV was built around this couch. LOL)…

I'm going to be heading out to work on the cabover this morning for a bit.  Thunder in the distance, but  it looks like it's going to roll north of me.  Darn...need the rain here.

While I was having my cuppa's this morning I was looking around at upholstery fabrics.  I thought I might stick with color schemes that go with the striping on the RV, blues and teals.

Here's a color combo choice I am mulling over, the dark plain color would be for the main seat… 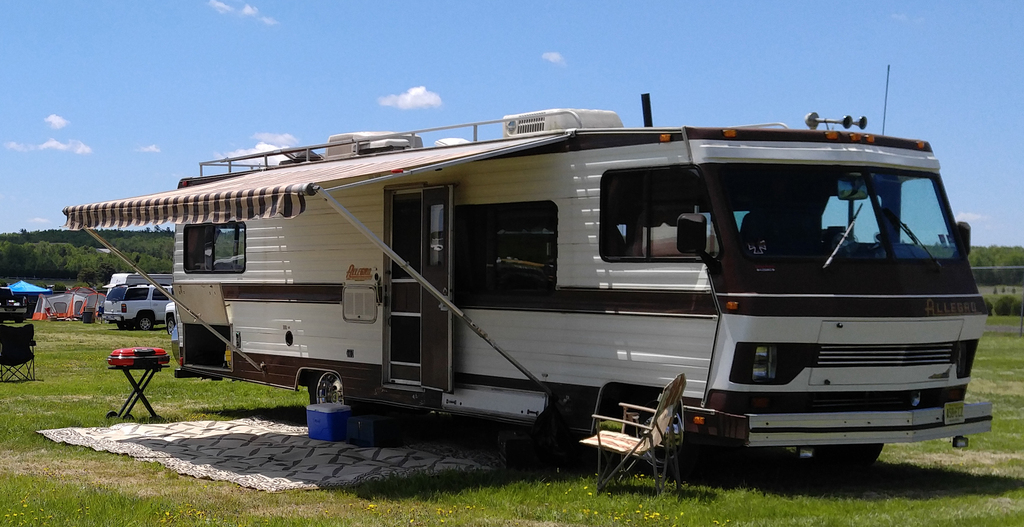 Today's Pocono 400 race was the first trip out this season with the old Allegro. I am the world's worst procrastinator. I didn't get to half of the work that I wanted to do on the rig before I left. And I had to leave the race early because I have school work due at midnight (that I am not doing right now - I'm typing up this post instead :) )

Ceiling issue solved...no money spent. This is working out great!

In my basement...which suffered major water damage when a sump pump gave out during a heavy rainstorm (water seeped in through a crack in a block. The ground could not keep up with the water)

...is a drop ceiling.  The tiles suffered damage with warping from the humidity, so they all had to come down.  I have loads of channeling in the crawl space, and I looked at that and wondered.

It worked!  I screwed this channeling onto both sides of the 2x4 where the ceiling was dropping…

Okay, the hard part of the framing inside is done. Those 2x4's were purely exasperating trying to get them up without a helper. My arms were screaming murderly.

I am going to hafta to do the 2x2's between the 2x4's because of the length of the 2x4 run. As soon as I took down the support lifts the ceiling sank in the middle a bit. So, hopefully the 2x2's will stop that from happening.

I did some toe nailing and did angle brackets on one. And this wood splits easily. I like the…

Started by John Lipka in Class A RV Discussions. Last reply by Grey Wolf 36 minutes ago.